When Apple debuted the original iPhone in 2007, Nokia had already sold more than one billion phones. Nokia reached that mark in 2005, in fact, when the Nokia 1100 was a hit thanks to its solid build and low price. Now, Nokia is nowhere to be found and Apple has sold its billionth iPhone.

"iPhone has become one of the most important, world-changing and successful products in history," Cook said in the statement. "It's become more than a constant companion. iPhone is truly an essential part of our daily life and enables much of what we do throughout the day. Last week we passed another major milestone when we sold the billionth iPhone. We never set out to make the most, but we've always set out to make the best products that make a difference. Thank you to everyone at Apple for helping change the world every day." 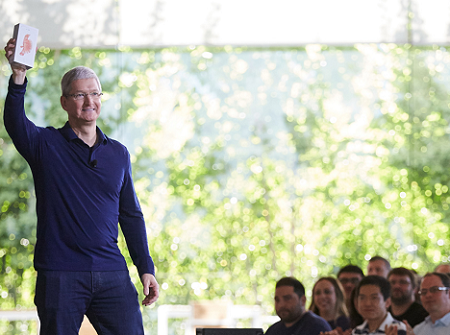 Apple fans were frothing at the mouth after Apple announced the first iPhone, but there were plenty of skeptics in the then-entrenched industry dominated by Nokia, Motorola, BlackBerry, Palm, and Sony Ericsson.

BlackBerry co-CEO Jim Balsillie said at the time the iPhone "had rapid battery drain and a lousy keyboard." Mike Laziridis, BlackBerry's other CEO, said, "It's going to collapse the network" due to its full web browser, according to Losing the Signal: The Untold Story Behind the Extraordinary Rise and Spectacular Fall of BlackBerry.

The Atlantic reported that Google engineer and part of the original Android team Chris DeSalvo had said, "As a consumer I was blown away. I wanted one immediately. But as a Google engineer, I thought 'We're going to have to start over.'"

Microsoft CEO at the time Steve Ballmer openly scoffed at the iPhone. "There's no chance that the iPhone is going to get any significant market share. No chance. It's a $500 subsidized item. They may make a lot of money. But if you actually take a look at the 1.3 billion phones that get sold, I'd prefer to have our software in 60% or 70% or 80% of them, than I would to have 2% or 3%, which is what Apple might get," he told USA Today.

In 2007, it was hard to see just how much the wireless industry would change in the years ahead, but change it did. It took Apple only 74 days to sell one million iPhones. Ballmer, Balsillie, and others probably began to reevaluate their opinion of the iPhone at that point.

Looking back at the carnage now shows entire companies laid waste by the iPhone's wake. Nokia is gone, as are Sanyo, Pantech, and Palm. BlackBerry and Microsoft have completely ceded the market to Apple and Android, but are still clinging on for dear life. Motorola is a shadow of its former self, as is Sony. Apple's only real competition is Samsung, which is now the world's largest maker of phones.

"Today, Apple is going to reinvent the phone," said former Apple CEO Steve Jobs when he introduced the first iPhone. Did it ever. Jobs would surely be proud of Apple's latest accomplishment.

Eric is a freelance writer for InformationWeek specializing in mobile technologies. View Full Bio
We welcome your comments on this topic on our social media channels, or [contact us directly] with questions about the site.
Comment  |
Email This  |
Print  |
RSS
More Insights
Webcasts
The Changing Face of Threat Intelligence
Enabling a Smooth DX Transformation in the Post-Pandemic New Tomorrow
More Webcasts
White Papers
Wi-Fi 6: The (Much) Bigger Story
2020 Trends to Watch: Cybersecurity
More White Papers
Reports
The New Face of IT Automation
State of Cybersecurity Incident Response
More Reports

If Blackberry created the category, then the iPhone was the "category buster" -- turned the market  into what it is today, and the capabilities to go along with it
Reply  |  Post Message  |  Messages List  |  Start a Board

BlackBerry co-CEO Jim Balsillie said at the time the iPhone "had rapid battery drain and a lousy keyboard." Mike Laziridis, BlackBerry's other CEO, said, "It's going to collapse the network" due to its full web browser.

"There's no chance that the iPhone is going to get any significant market share. No chance. It's a $500 subsidized item. They may make a lot of money. But if you actually take a look at the 1.3 billion phones that get sold, I'd prefer to have our software in 60% or 70% or 80% of them, than I would to have 2% or 3%, which is what Apple might get"

It is an amazing number for sure.  But the iPhone is not the only experience to be had.
Reply  |  Post Message  |  Messages List  |  Start a Board

It's quite amazing how successful the iPhone has been, turning Apple into the mega corproration it is today. However I never liked its business tactics. In the early versions of the iPhone it restricted common features like Bluetooth and copy and paste for new versions, just to keep people upgrading.

They're still too expensive for what you get too. Style over substance is Apple's calling card.
Reply  |  Post Message  |  Messages List  |  Start a Board

This is amazing, I thought it stop when Steve Jobs died but I was wrong
Reply  |  Post Message  |  Messages List  |  Start a Board
Editors' Choice
Hot Topics