50%
Tweet
A new Android Trojan reminds us of the growing threat to mobile devices. Follow these five simple security tips to protect your smartphones and tablets from mobile malware. 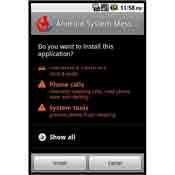 (click image for larger view)
Android Trojan App Seeks Full Access
A new Trojan horse app has emerged to target Android devices, and this one's particularly creepy. The app records a user's phone calls and then uploads them to a remote server. The app was revealed Tuesday by security researcher Dinesh Venkatesan on the Security Advisor Research Blog, published by CA Technologies, now known as Total Defense. While this particular Trojan doesn't appear to be a threat in the wild--at least not for North American users--it's a good reminder of the growing threat of mobile malware.

New smartphone malware emerges on a weekly--sometimes daily--basis of late, though most users have yet to take the threat as seriously as PC-based malware. But according to Robert Vamosi, senior analyst at device security company Mocana and author of When Gadgets Betray Us, we should be increasingly concerned about the threat of mobile malware.

"There are more mobile devices today than there were PCs connected to the Internet in 1996," Vamosi said in an interview. "Cybercriminals are realizing that, unlike PCs, mobile devices aren't very well secured."

In addition to outright malware, there are other ways that mobile devices can put your secure information at risk. "Smartphone users should indeed have a certain level of concern, or at least a security conscious mindset, when it comes to mobile malware," according to Jeffrey Wilhelm, senior analyst at Symantec Security Response. "That said, there are still other threats facing mobile device users that are a bigger concern than mobile malware, namely the loss or theft of a device."

Just like a malware-infected phone, an unsecured device can be a serious liability if it's lost or stolen. A thief or ill-intentioned finder can access personal contacts, email, and--quite often--social networking accounts and even online banking resources.

Fortunately, there are some simple steps anyone can take to protect their phones and tablets from the growing threat of malware and the persistent threat of unsecured devices. Here are five easy steps you should take to secure your own devices, and share with the mobile users you know.

This should seem like a pretty obvious tip, but clearly most people need a good reminder, since the majority of smartphone users don't lock their phones at all. Putting a simple passcode on your phone is the first step--and could be the only step required--in protecting a device when it goes missing. But if a ne'er-do-well gets his hands on a phone with no passcode, as Symantec's Wilhelm pointed out, that's as good as an invitation to identity theft.

2. Use Only Well-Known App Markets

Dark Side of AI: How to Make Artificial Intelligence Trustworthy Guest Commentary, Guest Commentary,  9/15/2020
White Papers
2020 Gartner Market Guide for Network Detection & Response
How You Can Evaluate Your Org's Cybersecurity Readiness
How IT Security Organizations are Attacking the Cybersecurity Problem
Leveraging DevSecOps to Secure Cloud-Native Applications
How to Prioritize Risk Across the Cyberattack Surface