Our InformationWeek 2013 Virtualization Management Survey shows automated service delivery is the future -- unless you want to find yourself managing cloud providers.

The status quo can even be downright obstructionist if teams fight over who will control which resources and own new responsibilities.

Organizational difficulties aside, we don't yet have the management tools to bring next-generation virtualized networking, I/O, application, and storage technologies under one, or even two or three, panes of glass. Unified management of all these virtualized resources is a bridge our vendors must cross: A large, distributed enterprise infrastructure might mix three types of virtualized storage arrays, two different server hypervisors, a virtual desktop connection broker, an application virtualization controller, an I/O virtualization controller, and an SDN appliance. That's potentially nine management interfaces, not counting Windows- and Linux-specific agents. Without understanding at each and every layer how an application is delivered, it's almost impossible to quickly diagnose problems and maintain quality of service.

Unfortunately, the present market is so diverse and so nonstandard that managing such a large infrastructure leaves little time to understand how applications on virtualized infrastructures are being delivered. This is an important point because IT teams are increasingly driven by the concept of business services, where compute, network, security, and storage are packaged and delivered on demand. When we analyze the state of virtualization, what we're really talking about is commoditization of an application or service, without care for the underlying infrastructure--freedom to distribute each and every service exactly where and when it's needed, with no wasted resources. This idea of total divorce from the physical at every level of the data center is what's giving rise to the latest virtualization paradigm of policy-driven, cloud-based automated service delivery. CIOs need to take this vision seriously if they plan to help business units implement new initiatives fast and match the "instant-on" computing resources offered by public cloud providers like Amazon and Rackspace.

Speaking of cloud, vendors including Cisco, Citrix, Microsoft, and VMware are trying to help in-house IT compete with their new flagship private cloud offerings. The vision: Put a bunch of stuff in a room and let that stuff run your data structures, desktops, and application stack. Just tell it what you want (read: policies) and turn it loose. The infrastructure automatically operates at 100% efficiency and is always up. When it gets overcrowded with requests, it tells you that it needs more hardware, at which point you throw in another server or whatever, and the gear is dynamically absorbed and deployed where needed to deliver on performance guarantees.

This scenario is a long, long way from current private cloud reality, where elasticity, scalability, and organization of services are a direct result of IT elbow grease, not automation. But it's where we need to be aiming. In fact, policy-based service delivery has been the end goal of most big hypervisor vendors since day one. But can they pull it off?

Respondents are skeptical--11% flat out say they don't believe in this vision, and 27% confess ignorance. Of those respondents who have a positive opinion, only one-fifth think that a single virtualization provider can get them there. That's not exactly a vote of confidence in products, such as VMware's vCloud, that purport to deliver service-oriented IT in a single suite. Fully 41% of respondents say it's either too complex to attempt at present or that it will require multiple vendors--an opinion that we're inclined to agree with given the fragmented market.

As to why IT's driving forward anyway, operational flexibility and agility ranked as the top driver for server virtualization and physical-to-virtual conversion among survey respondents in our 2011 and 2013 surveys.

Never let it be said our respondents aren't an optimistic bunch. 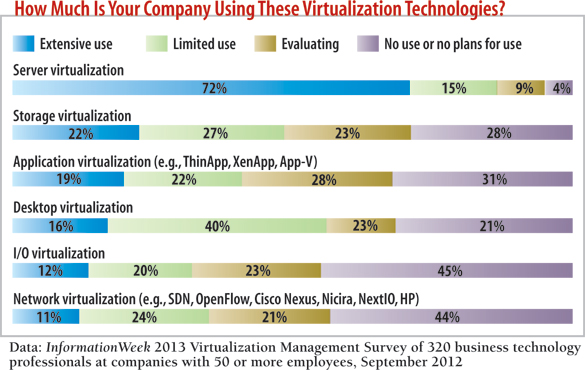