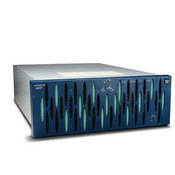 Acer Hitachi AS2040 Storage Array
Acer has introduced the Hitachi-built storage products it will offer in the U.S. with the Acer servers launched two months ago for small and midsize businesses.

The Hitachi systems include the AS2040 storage array and its Adaptable Modular Storage 2000 (AMS 2000) family of scalable storage, Acer said Tuesday. The products will complement the 16 servers, including tower, rack, blade, and rack multi-node models, Acer introduced in the U.S. in February.

Taiwan-based Acer has sold servers and storage in Asia and Europe for years, but is a newbie in the U.S. market. The company plans to compete against leaders Hewlett-Packard, Dell, and IBM through channel partners, which Acer says it will announce in the future.

Acer plans to use the channel as an alternative to spending a lot of money building a nationwide direct sales force. Because distributors also sell competitors' products, Acer will have to compete on terms and pricing in order to entice partners to push its technology.

One advantage Acer believes it has is the fact that it won't be competing with sales partners. "Acer has no plans to take this business direct," Bret Gibbs, storage product manager for Acer America, said in an interview. "When we say we're going to go 100% indirect, the partners that we're partnering with out there aren't going to have to worry about us coming back around and competing with them."

Acer is hoping Hitachi, which sells storage and other gear to large corporations, will provide the credibility it needs to add business supplier to its resume. The company is best-known in the U.S. as a low-cost, consumer PC vendor.

"You can't just go in to this market, put a name on a product and say, hey, look at me, come buy me," Gibbs said. "We definitely want the Hitachi name attached to our products."

The partnership is beneficial to Hitachi, because it can use Acer's experience in marketing to the low-end of the U.S. market and SMBs in other countries. "Acer's forte has always been in the consumer and the small and medium business region," Gibbs said. The Acer Hitachi AS2040 storage arrays support up to 180 terabytes using multiple RAID levels. The arrays can be configured with mixed tiers of SAS and SATA drives and come with Hitachi management software.

The AMS 2000 family includes the AMS 2100 and AMS 2300 systems. The former supports 512 virtual server ports and scalable capacity up to 236 terabytes, while the latter supports 2048 virtual server ports and 472 terabytes. The systems come with Hitachi's system diagnostic utility and remote replication software for disaster recovery, data retention or data migration.