Android N is shaping up to be an exciting release from Google. On Wednesday, at its Google I/O developer conference, the search giant detailed many of the new features headed to its mobile operating system, as well as a bevy of new apps that will accompany the platform. Here is a rundown of most important additions to Android.

Google says it believes the Vulkan 3D rendering API will deliver huge performance gains in Android N. Vulkan gives developers more control over the processor inside the phone, letting games tap into more of the processor's power. It should boost 3D graphics rendering in a big way. Vulkan includes a new just-in-time compiler that allows apps to use fewer resources, thus speeding them up.

Productivity is top of mind in Google, which is why Android N adds split-screen multitasking and picture-in-picture. The former will let users run two apps side by side and move content between them, while the latter will let YouTube videos, for example, run in a smaller window while users complete other tasks.

Security is always important. Android N takes a page from Google's own Chromebooks. The core operating system will be able to download security and system updates automatically in the background. Google says this will improve security across the platform. Android N also adds file-level encryption and end-to-end protection for certain messaging features. Last, Android N resolves a long-standing vulnerability with respect to retrieving media files. 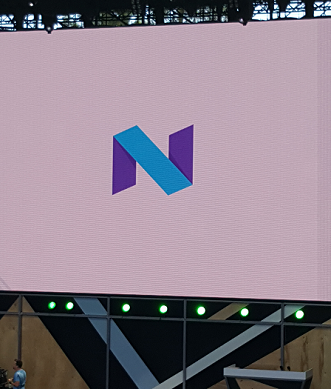 Android Instant Apps are another interesting idea demonstrated onstage at Google I/O. The idea behind them is to empower people to consume content even if the content requires an app that's not installed on the phone. For example, let's say you don't have YouTube on your phone, but a friend shares a YouTube video with you via message. With Android Instant Apps, clicking the YouTube link in the message body will cause the content to install the needed components of YouTube to view that content. Those components will only be installed temporarily, but people will be given the option to download the full app.

Android N will form the basis of Daydream, a new virtual reality platform from Google. Daydream will give developers a base set of guidelines for creating virtual reality apps that will work across a wider range of devices. A handful of phone makers have committed to bringing Daydream-compatible phones by the fall months. Compatibility will be based on the display, graphics, and processor power. Daydream also includes a VR headset blueprint that manufacturers can use to create headsets.

Google previewed Android Wear 2.0, which focuses on usability tweaks. It takes aim at messaging, fitness, and watch faces. Messaging, for example, will be easier thanks to expanded preformed replies, better handwriting support, and keyboards. (Yes, keyboards on your watch!) On the fitness front, Android Wear 2.0 includes an automatic activity tracker that will start recording runs, bike rides, and other activities when those activities are sensed. Last, watch faces gain support for complications. Android Wear users will be able to add interactive tools to watch faces so the wearable displays the content they really want to see.

Android N sets its sights on automakers as well. More car manufacturers are relying on Android Auto to serve as the basis for their in-dash infotainment centers. To help encourage wider adoption of Android Auto, Google is creating a version of it that will work independent of a nearby smartphone. On the flip side, Google is also creating a version of Android Auto that will function only on phones, allowing people who own or drive older cars to use it even when the car doesn't support it. Google partnered with Qualcomm to bring its Snapdragon processor platform to Android Auto, and that will give in-car systems more horsepower to drive apps.

Google has released a beta build of the platform. Android N has graduated from alpha status, and now is stable enough to use on everyday smartphones and tablets. The Android N Developer Preview 3, compatible with the Nexus 6, 9, 5X, 6P, Nexus Player, and Pixel C, is available now.

Eric is a freelance writer for InformationWeek specializing in mobile technologies. View Full Bio
We welcome your comments on this topic on our social media channels, or [contact us directly] with questions about the site.
Comment  |
Email This  |
Print  |
RSS
More Insights
Webcasts
5 Steps to Integrate SAST into the DevSecOps Pipeline
Are You Ready for When Cyber Attackers Get In?
More Webcasts
White Papers
Using AI to Power AppSec
[IT Trend Report] The Future of Cloud
More White Papers
Reports
Can You Spare 10-12 Mins to Help Us Out with a Survey on Tech Trends?
Got 7 Minutes? Dark Reading Needs Your Help With Our Survey on Incident Response
More Reports