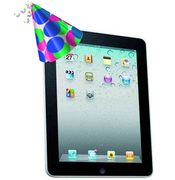 Apple and Chomp CEO Ben Keighran did not respond to requests to confirm the deal, but Businessweek, citing a person familiar with the matter, insists the deal is done. Apple news site 9-to-5 Mac says that Keighran and CTO Cathy Edwards are already working at Apple.

Apple CEO Tim Cook, speaking at the company's annual shareholders meeting on Thursday, made no mention of the deal. But he reiterated that Apple executives are thinking deeply about how to spend the company's cash stockpile.

In contrast to the company's recent acquisitions, which have enhanced its hardware or the software that runs on it, Chomp offers improved search and discovery capabilities for Apple's app stores. While the deal will benefit Apple, it will be even more helpful to third-party developers, who can expect greater exposure to potential customers.

Chomp presently helps people find Android apps, too, but that's not likely to last long with Apple in charge.

[ For more about the challenge of finding the right apps, read Finding Apps In A Haystack. ]

App visibility becomes more of a problem with every app released--with over 500,000 iOS apps, it's easy to miss the gems. And Apple has compounded the problem by attempting to limit the ways in which apps can be promoted, or "made discoverable," to use the passive construction that disguises the act of marketing.

One of the more popular ways to get an app noticed is to pay a marketing company to download the app enough times that it ranks in an iTunes App Store Top 10 chart. After that, thousands of people see the app, and the fake popularity becomes real popularity. But Apple frowns on the practice.

"Even if you are not personally engaged in manipulating App Store chart rankings or user reviews, employing services that do so on your behalf may result in the loss of your Apple Developer Program membership," Apple warned developers in early February.

Apple's motives may be pure--the company wants a level playing field--but the cost of that integrity has been borne by developers, who often have few options to get users to notice their apps. Perhaps with Chomp, there will be more officially sanctioned paths to app exposure.