SEARCH
A minimum of 3 characters are required to be typed in the search bar in order to perform a search.
Announcements
Alert
Got some free time? Grow your knowledge from the comfort of your computer for FREE!
Alert
Are you looking to stay on top of IT trends? Check out our FREE webinars and virtual events!
Alert
Planning for 2023? Be sure to check out our upcoming in-person events!
Report
How does your salary stack up? 2022 IT Salary Survey Results Revealed
PreviousNext
Mobile
2 MIN READ
News

SMBs using the remote backup service can access their files, view, print and fax directly, instead of going through the website.
Daniel Dern
Contributor
November 22, 2010 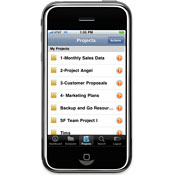 AT&T announced on Monday a free iPhone app that aims to give small business owners better mobile access to the files in their AT&T Backup and Go accounts. AT&T offers similar free mobile apps for BlackBerry and Android devices.

AT&T's Backup and Go service, part of AT&T Tech Support 360, provides remote backup of files on Windows and Mac desktop and notebook systems, for unlimited amounts of internal drives (but not external drives or devices). According to the company, backup is continuous and is performed each time a file is changed or saved. Files on the remote service can be accessed using a browser; this access can include viewing, sharing, faxing (for users who also have an eFax account), or emailing a URL. That allows the message recipient to view, download or print the specified file.

The new AT&T Tech Support 360 Backup and Go Mobile App provides better access than using the web browser on a smartphone. According to AT&T, the mobile app "uses an enhanced user interface that integrates seamlessly with smartphones, and can display 52 of the most common file types, including documents, spreadsheets, presentations, and photos. Previously, smartphones were limited to browser-based access to the Backup and Go service."

Nancy Mineo, marketing director for AT&T Small Business Product Management, said, "This app makes it even more convenient for iPhone users to access their files, view, print and fax, directly instead of going via the web site. And for a smartphone user, the app's user interface is much more user-friendly than the web site."

David Strom, a computer/network consultant who maintains a comparison table of online backup services, commented, "The ability to quickly view documents, and to easily send them to other people, from your smartphone, has increasing utility -- it eliminates another reason to pack a notebook or netbook." He added that Backup and Go offers intriguing features, such as the no-size-cap pricing and the easy document sharing. Making the service easier to use on an iPhone, at no extra cost, makes it more tempting to more business users."

The AT&T Tech Support 360 Backup and Go Mobile App is available free, from iTunes. According to the iTunes page, the new AT&T app is compatible with iPhone, iPod Touch, and iPad (requires iOS 3.1 or later). Users need an active Backup and Go account from AT&T Support 360.

Similar free mobile apps are already available for BlackBerry and for Android devices.