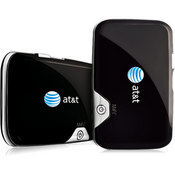 Novatel MiFi devices have been on the market for several months, although AT&T said its version will come preloaded with MiFi OS, widgets and applications support.

The AT&T Mobile Hotspot will be available at AT&T company-owned stores nationwide for $149.99 with purchasers eligible to receive a $100 mail-in rebate in the form of a $100 AT&T Promotion card. The device will also be available at AT&T's online store.

The device fits into AT&T's ongoing drive to make Wi-Fi widely available as its network has become burdened with the success of its iPhones. The company has instituted metered plans to encourage subscribers to seek out Wi-Fi locations, many of which are free-of-charge. AT&T noted that its third quarter Wi-Fi connections have jumped more than 320% in the third quarter over the previous year's third quarter. The company has more than 23,000 hotspots in the U.S. and, through roaming agreements, offers access to more than 125,000 hotspots worldwide.

"This is in line with the industry trend to provide consumers with access to Wi-Fi in as many places as possible," said Joe Fristensky, vice president, information and communications technology at Frost & Sullivan.

Enabling simultaneous uploads and downloads as well as large file transfers, the MiFi has a built-in microSDHC slot for expandable storage capacity up to 32 GB. The company said the mobile hotspot is GPS-capable for location-based services.

Unlocked MiFi devices have been popping up on the AT&T network, acquired from online sites like Amazon and eBay at prices generally ranging between $250 and $400.

Verizon Wireless has beaten AT&T to the punch with MiFi for Apple's iPad. Verizon's Wi-Fi version of the iPad is packaged with Novatel's 2200 mobile hotspot. AT&T has long been the exclusive marketer of Apple's iPhone, although there have been reports that Verizon will offer a CDMA version of the phone next year.

AT&T will institute metered charges for its MiFi, but the best deal on the market so far is Virgin Mobile's $40 a month for unlimited data for its MiFi device.