The Opera web browser, from Opera Software, has long been one of the most innovative browsers available, and has been the first to introduce many features that became common in all browsers, such as tabbed windows. With the recent released beta of Opera 11, the browser continues this tradition with several interesting new capabilities, including the ability to load plugins on demand within web pages. The Opera 11 beta also includes some features already found in other browsers, such as competing
Jim Rapoza
Contributor
December 01, 2010 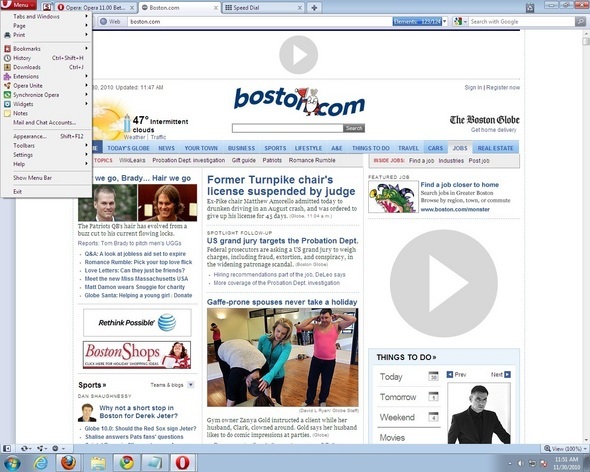 In a trend that has become common in newly released beta browsers, such as the betas for IE 9 and Firefox 4, the recently released Opera 11 beta now has much of the same look and feel as Google's Chrome browser.

For a long time the Opera web browser was the clear innovator in the browser space. Opera was often the first to introduce features, such as tabbed browsing, that became standard browser capabilities.

And while other innovative browsers, such as Google Chrome, have been pushing the browser feature envelope as well, Opera Software's eponymous browser still remains one of the most innovative and cutting edge of all browsers.

In tests of the recently released beta of Opera 11, I found Opera to still be one of the most powerful and capable browsers available, and one that a power user can configure to meet their exact needs. The beta of Opera 11 showcases some new features that will likely become standard in competitors in the near future.