Consumerization Of IT: How To Support All These Gadgets 2

Should you offer no IT support for employees' consumer tech, or embrace it and do all you can?
Randy George
Director, IT Operations, Boston Red Sox
March 25, 2011
There's a rule of thumb for most CIOs: When the CEO makes a request, the answer is YES. If you're a systems administrator, therefore, you're on the lookout for your CIO saying YES to mobile device support, because that means a big yellow school bus is getting ready to run you over.

The consumer effect is turning companies' IT labs into something that resembles the return bin at Best Buy, thanks to the variety of devices they're testing for business use. After CIOs make the call on whether to allow consumer tech into their companies in the first place, based on risks, costs, and benefits, the next big call is the glorious task of figuring out how to deploy, secure, and manage the gadget of the week.

Should you even offer IT support to employees bringing in consumer tech? The answer is all over the map, our survey of 551 business technology pros finds. Only 22% say their companies draw a hard line of no support, but another 20% offer only very limited support. About one-third don't have any policy, so IT helps where it can, while 23% encourage their device mavens to contact tech support.

It's not a simple decision. If these devices were completely frivolous, you could make a case for ignoring them. But if iPads become a productivity boon to salespeople, then eventually you'll need a scalable plan to support them.

Big companies for years flocked to the BlackBerry because its operating system is stable and secure, and BlackBerry Enterprise Server makes quick work of managing and deploying a huge number of those devices. Sure, you can't play Angry Birds on your BlackBerry, but are company employees really supposed to be playing games, watching movies, and listening to music on the job?

Not on the clock, perhaps, but many employees expect to use one device for personal and professional tasks. Companies are starting to meet them at least halfway. According to our research, 67% of companies let employees get company email on their personal devices, and 48% let them connect those devices to the VPN.

So if you've accepted that you have little say and even less control over what devices pop onto your LAN, then you're ahead of the game. However, you still need a plan for supporting the wide range of consumer devices headed your way. Prepare for some problems in the following areas.

Your support woes will begin with email, and the amount of work will depend on the device, the mobile OS, and the carrier. One of the mistakes Google and the wireless carriers made early on with Android was failing to anticipate how many customers would want to use the Droid device to access work email. Early versions of Android OS had support for Exchange ActiveSync that was shaky at best, so systems admins (after letting some expletives fly) had to use third-party messaging software such as Touchdown for Android. Newer versions of Android have a rock-solid ActiveSync client, but some Droid users may still need third-party software to make up for some of the controls they get from Research In Motion for the BlackBerry.

The native ActiveSync client included with Apple's iOS works well. There are still plenty of security issues (see story, p. 13), and some companies will turn to software such as Good Technology's to add additional management benefits. But if you're worried only about remotely wiping messaging data from the device, that's now available right from the Exchange Management Console. Just make sure you test it on new devices that you need to support first.

When it comes to supporting applications on your mobile devices, setting expectations is key. Before you give a shiny iPad 2 to top execs, make sure they understand that a tablet can't do everything a laptop can, and they can't go to the App Store and install Microsoft Office.

However, at some point you'll need to figure out a way to serve the applications your company uses on every device. Today, that's actually pretty easy thanks to application streaming technology.

Before the Citrix XenApp client, now available for many mobile operating systems, companies determined to deploy business applications on handheld devices had to build the mobile app from scratch using development tools from each manufacturer. Today, they can stream corporate apps instantaneously to a wide range of devices with very little effort and cost.

With Citrix XenApp, for example, you can launch a desktop session and run apps inside that session. It looks and feels like a remote desktop connection, but it works amazingly well. Third-party management tools can push out content and apps to a range of devices.

But get ready for some more work on the support side, because as tablets and smartphones evolve, you'll need to apply the same desktop management tools and procedures to them as you do to your fat clients. That might mean supporting a management client, or troubleshooting connectivity problems that prevent apps and content from being published. It might mean monitoring application usage and storage utilization on mobile devices. Mobile devices aren't (yet) as prone to virus or malware infections as PCs are, so managing consumer-oriented mobile devices isn't as onerous as managing a PC, but it will add an additional burden nonetheless. 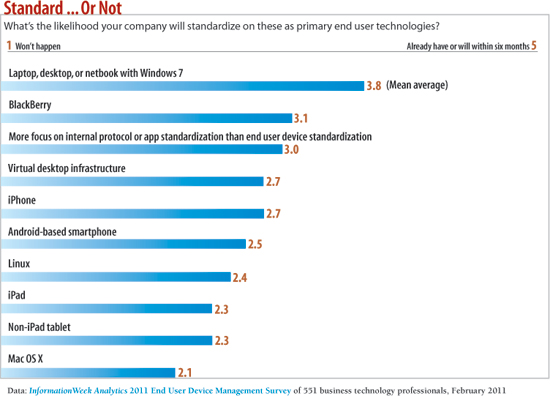 You need a scalable way to manage the mishmash of gadgets you'll be supporting. Neither Apple nor Google supplies a management server for devices based on iOS or Android. Microsoft offers a plug-in to System Center for Windows Mobile management. As a result, finding a way to somehow centrally manage these devices is your problem.

For Apple and Google devices, third-party providers such as Zenprise, BoxTone, and AirWatch have stepped in with software for provisioning, deployment, management, reporting, and security tasks. You can use them to keep an eye on mobile OS hot fixes, patches, and updates. The reporting you'll receive from scalable mobile device management software will be a huge help in keeping on top of who's running which mobile OS.

One last thing: If you have any interest in getting out in front of stability and compatibility problems, make sure your support staff has the devices they need to support in the lab. There's nothing more frustrating than not being able to quickly support a device simply because IT doesn't own one.

Buying those devices costs money, but so does most everything covered here, and CIOs need to decide if the cost is worth what their companies get from consumer IT. Companies don't have to provide support--as we note, more than 40% offer none or little. But another third leave IT to figure out how and when to help employees. That's not a policy. Consumer IT is here to stay; CIOs need a strategy.