As our own Fred Paul pointed out last summer, "smaller companies can afford to be more aggressive in moving to 802.11n than their larger competitors because they have less of an installed base to worry about. That may offer a temporary competitive advantage, at least until the big players catch up. And even if your small company can't afford to rip up perfectly good existing 802.11g Wi-Fi implementations, there's no need to stick with g when you need to replace existing equipment or install new stuff."

In that same column, he quoted D-Link technical marketing engineer Joe Melfi, who said, "Why buy g? Spend the money on n!"

If that was true six months ago, it's even more so now. Of course, D-Link has a vested interest in hawking "n" product. In fact, the company has just released a dual-band access point targeted specifically to the owners and IT managers of small and midsize businesses. 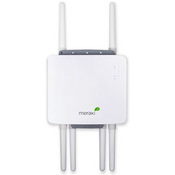 According to D-Link CTO A.J. Wang, the DAP-2553 "is a versatile and affordable solution for growing businesses seeking to deploy a next-generation 802.11n WLAN. It is designed specifically for SMB environments to provide secure, scalable, and manageable dual-band wireless LAN options for network administrators."

The access point has integrated PoE support, claimed signal rates of 300Mbps (2.4GHz or 5GHz), WMM support, and include both WPA and WPA2 encryption. The product will set you back $764. And though it's the only 802.11n product released this week (so far) laying claim to the SMB market, it's by no means the only 802.11n product. For instance, Meraki's MR58 802.11n access point was just released; a weatherproof product designed for outdoor use that will set you back $1,499.

If there's not an 802.11n product you like out there right now, odds are you won't need to wait long.