SEARCH
A minimum of 3 characters are required to be typed in the search bar in order to perform a search.
Announcements
Report
IT Enterprise Dashboard: This interactive data tool enables access to global research on IT budgets, business challenges
Event
Get in-depth insights & analysis from experts on all aspects of communications, collaboration, & networking technologies
Event
Data Center World is the leading global conference for data center facilities and IT infrastructure professionals.
Report
Find out what you need to know so that you can plan your next career steps and maximize your salary.
PreviousNext
Mobile
News 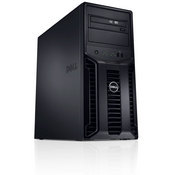 The entry-level PowerEdge T110 II and midmarket PowerEdge R210 II servers both ship with Intel's Sandy Bridge processors, among other enhancements. The T110 tower primarily targets smaller firms considering their first on-premises server, while the rack-based R210 model might be more likely to attract midsize companies or SMBs of all stripes looking to expand their current server architecture.

"There are still a lot of customers out there who haven't made that first step towards a server," said Tony Parkinson, Dell's director of SMB, in an interview. "They're still running--or trying to run--their infrastructure on the desktop. We really want to help them move away from that architecture because it's not scalable, it's got lots of risk in terms of potential downtime, and security is a real concern in those types of environments."

Storage has become a major push for Dell of late, highlighted by a series of recent acquisitions in the space. The PowerVault NX3500 is a network attached storage (NAS) unit intended to merge file and block-storage needs on a single device. The PowerVault MD3600i is an Ethernet-based (10 Gigabit Ethernet) iSCSI storage area network, which Dell is emphasizing for SMBs that have--or plan to deploy--virtualized environments. Both new PowerVault models integrate Dell's Scalable File System.

"Customers are really struggling with this explosion in data, because it's really coming at them from so many different angles," Parkinson said, pointing to the proliferation of smartphones and other mobile devices--and the content they produce--as one cause.

The latest updates come at a time when SMBs appear to be ready for technology upgrades after an extended period of recession-related belt-tightening.

"It's like an old car: You can't just keep repairing it or keeping it alive. It's costing you more to patch it up," Parkinson said. He added that Dell first began to see SMBs pick up their spending again in areas such as its Vostro segment, which has, in turn, fed server and storage demand. "We're seeing the client side drive the server architecture side."

Parkinson also said that SMBs are asking sharper IT questions of late on subjects such as data tiering, virtualization, and disaster recovery. "We're starting to see sophisticated questions coming in around topics like deduplication which, quite frankly, used to be like a foreign language or some mystery to a lot of customers," Parkinson said, noting that Dell's SMB portfolio will soon incorporate the deduplication technology it picked up as part of last year's acquisition of Ocarina Networks.