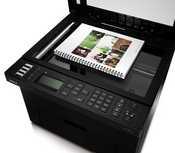 The 1355 uses next-generation color LED technology, with an array of fixed LED lights, instead of the moving single-laser light used in laser printers. "Everything except the laser is the same as in a laser printer, like the toner, drums, and fuser," said Dell's Muscato.

According to Muscato, the color quality of Dell's LED printers is "'quite remarkable, for skin tone, color brilliance, color quality as a whole, in many ways superior to laser printers."

The 1355 prints at up to 15 ppm mono and 12 ppm color, and, according to the company, is "virtually maintenance free, with drum and fuser designed to last the lifetime of the printer."

Dell also announced its Open Printer Driver (OPD), a universal driver that will work on any Dell or other PostScript, PCL5, or PCL6 printer. According to Dell, the OPD "is designed to reduce the complexity of printer driver management.