50%
Tweet
Desktop Twitter clients offer some advantages over browser-based options for the more than 175 million registered Twitter users navigating the tens of millions of daily Tweets. Desktop clients free user from the limited range of controls and UT metaphors found in the browser, and there's less chance of being bitten by a web-based exploit. Moreover, third-party browser-based clients, such as HootSuite and Slipstre.am, hint at different ways of interacting with Twitter. It's no wonder that third-p 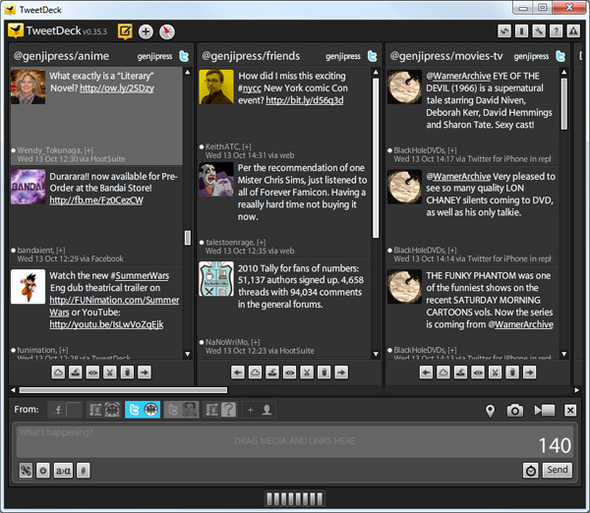 TweetDeck is an Adobe Air application, meaning it runs on almost every platform you might find yourself tweeting from: Windows, Mac and Linux, as well as Android, iPhone, iPod Touch and iPad. Besides being a Twitter client, TweetDeck posts updates to many other widely used social networks: Facebook, MySpace, LinkedIn, Buzz and Foursquare. You can use TweetDeck as is or sign up for an account with TweetDeck's services that lets you add your own Twitter account(s) to the TweetDeck Directory (a faster way to have your tweets noticed) or sync your settings between different installations of TweetDeck.

Twitter, which has made a major push to get on mobile phones, says the number of people accessing the site through their handhelds has jumped 62% since mid-April. Twitter also reported Thursday that 16% of all new Twitter users now start on their mobile phone, much higher than the 5% in mid-April, when the company announced plans to have a Twitter-branded client on all the major smartphone platforms. Those platforms include Apple's iOS, found in the iPhone, iPad and iPod Touch; the BlackBerry OS from Research in Motion and Google's Android operating system, which powers phones from Samsung, HTC, Motorola and others. Nevertheless, the dominant way people head to Twitter remains their computers. In the last 30 days, 78% of unique users posted updates to the microblogging site through Twitter.com, while 14% use the site's mobile website, m.twitter.com; 8% text messaging, 8% Twitter for iPhone and 7% Twitter for BlackBerry. The numbers add up to more than 100%, because people use multiple apps in accessing the site.

Dark Side of AI: How to Make Artificial Intelligence Trustworthy Guest Commentary, Guest Commentary,  9/15/2020
White Papers
2020 Gartner Market Guide for Network Detection & Response
How You Can Evaluate Your Org's Cybersecurity Readiness
How Lockheed Martin Deployed Privileged Access Management in Just One Day
Gartner ZSP: Remove Standing Privileges Through a Just-in-Time PAM Approach
How to Prioritize Risk Across the Cyberattack Surface