How long will it take before IT organizations are tasked with enabling and securing smartwatches? Good Technology and AirWatch, two enterprise mobility management companies, are already preparing their respective platforms for such demands.

Two enterprise mobility management (EMM) companies are preparing their platforms for the next Bring Your Own Device trend to challenge the mettle of IT organizations. Good Technology, which was purchased in 2015 by BlackBerry, and AirWatch, acquired in 2014 by VMware, are adding tools to their respective platforms to help IT manage smartwatches in the enterprise.

As with iPhone and iPad before it, the demand to use Apple Watch in the enterprise may be driven by C-level executives eager to get their email, calendar notifications, and relevant business information on their shiny new devices. Dor Zakai, sales engineering manager at AirWatch, said in an interview with InformationWeek that most CIOs are not yet greatly concerned about managing smartwatches in the enterprise, except in the case of C-Level executives.

Nonetheless, Good Technology and AirWatch have been working closely with manufacturers and software vendors to ensure their EMM platforms support the wearables.

This should come as no surprise, given IDC's predictions of smartwatch growth over the next four years. According to a Dec. 15, 2015, IDC report, 34.3 million smartwatches will ship this year, up from the 21.3 million units expected to ship in 2015. "By 2019, the final year of the forecast, total shipments will reach 88.3 million units, resulting in a five-year CAGR of 42.8%," according to IDC.

The IDC report indicates that Apple is by far the dominant player, with a 61.3% share of the smartwatch market on 13 million units shipped last year. IDC predicts Apple's smartwatch market share will drop to 51.1% by 2019, as other contenders gain traction in the market. IDC predicts that in 2019 the Cupertino company will sell more than 45 million watches.

According to Zakai, the main challenge that new smartwatches, such as the Apple Watch and some Android devices, represent to enterprise mobility management platforms is their lack of standard APIs. Standardization would make it simpler to deploy a management system on the wearable devices, he noted.

Add to this the fact that some manufacturers are using a different OS for the watches than they use for smartphones -- such as Samsung's Tizen OS – and Zakai said EMM vendors are challenged to create an effective application that runs entirely on the wearable devices. 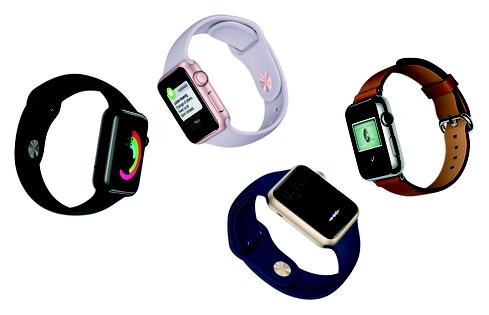 That's why Zakai said AirWatch is focusing its platform on managing the information enterprise smartphones are allowed to share with paired watches. Its platform, when installed on an employee's smartphone, can be used to restrict access to some smartwatch capabilities. For example, Zakai said, IT can restrict an Apple Watch from using Siri or launching the camera on the iPhone with which it is paired. IT can also use settings that limit notifications and messages displayed on the Apple Watch. An iPhone managed under the AirWatch platform can also be restricted as to whether or not its user can even pair it with an Apple Watch, according to Zakai.

Good Technology has a different approach, designed specifically for Apple Watch. The company has released "Good Work" for the device, which enables IT to configure the level of detail shown in watch notifications. For instance, IT can determine whether a user will be able to see an email's sender and subject line only, or whether they'll be allowed to view a full message on the Apple Watch.

Managing smartwatches in the enterprise likely will be one of the hot topics at Mobile World Congress in Barcelona, Feb. 22-25, where we expect new wearables to eclipse new smartphones at the show.

Is BYO-Watch something your IT department is concerned about? Do you use an Apple Watch or other type of smartwatch for work? If so, we want to know about your experiences -- tell us in the comments section below.

Pablo Valerio has been in the IT industry for 25+ years, mostly working for American companies in Europe. Over the years he has developed channels, established operations, and served as European general manager for several companies. While primarily based in Spain, he has ... View Full Bio
We welcome your comments on this topic on our social media channels, or [contact us directly] with questions about the site.
Comment  |
Email This  |
Print  |
RSS
More Insights
Webcasts
Monitoring Critical Cloud Workloads
Multi-Cloud Data Management for Modern Applications
More Webcasts
White Papers
Top Serverless Security Risks and How to Mitigate
Ransomware Security Breach Summary: Food Production
More White Papers
Reports
2021 Digital Transformation Report
2021 Email Threat Report
More Reports