The first quarter saw wearable shipments increase across the board, but there's now a clear division between devices like the Apple Watch and Fitbit Flex, according to IDC.

A fresh crop of devices helped push the market for wearables forward during the first three months of the year. Shipments improved to a total of 19.7 million units, says IDC, a 67% jump when compared to the year-ago period. Fitbit may have owned the market as a whole, but Apple held firmly to the top spot in the smartwatch segment.

Device makers used the Consumer Electronics Show and Mobile World Congress to roll out new models -- and consumers were eager to buy them. For example, Fitbit and HTC announced new fitness bands at CES, while Samsung, Casio, and Huawei all fielded new smartwatches. At the same time, Apple dropped the price of the Apple Watch Sport to a more affordable figure.

"The good news is that the wearables market continues to mature and expand," noted Ramon Llamas, research manager for IDC's Wearables team, in a statement, and continued:

The wearables that we see today are several steps ahead of what we saw when this market began, increasingly taking their cues from form, function, and fashion. That keeps them relevant. The downside is that it is becoming a crowded market, and not everyone is guaranteed success.

The first quarter recorded some change in the rankings across the category.

Apple dropped to third by shipping 1.5 million Apple Watches. Apple holds 7% of the overall wearables market. Garmin and Samsung round out the top five with shipments of 0.9 million and 0.7 million devices, respectively. This grouping includes both fitness bands and smartwatches. 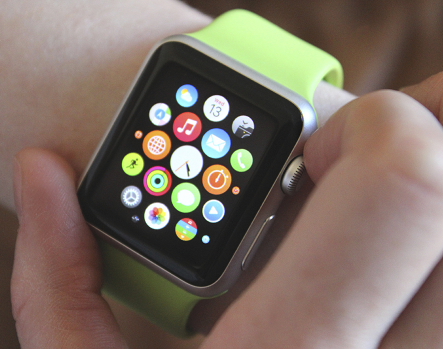 Pebble, an early success story in the smartwatch market, failed to rank among the top five. It was forced to trim its workforce and scale back investments earlier this year.

Now that there are clear lines in the wearables market between fitness trackers and smartwatches, IDC says each segment will experience different growth curves.

"There's a clear bifurcation and growth within the wearables market," said Jitesh Ubrani, senior research analyst for IDC's Mobile Device Trackers, in a statement. "Smartwatches attempt to offer holistic experiences by being everything to everyone, while basic wearables like fitness bands, connected clothing, or wearables have a focused approach and often offer specialized use cases. It's shortsighted to think that basic wearables and smartwatches are in competition with each other. Right now, we see both as essential to expand the overall market. The unique feature sets combined with substantial differences in price and performance sets each category apart, and leaves plenty of room for both to grow over the next few years."

The next wave of smartwatches isn't likely to arrive until the fall. Device makers have used the IFA trade show -- held early September in Berlin -- as a venue for showing off new wearables. We can probably expect to see new hardware from Motorola, Huawei, Samsung, LG, and others.

Apple isn't expected to field the Apple Watch 2 until the fall. It may be introduced alongside the iPhone 7 in mid-September. Until then, the smartwatch market will see limited growth.

Eric is a freelance writer for InformationWeek specializing in mobile technologies. View Full Bio
We welcome your comments on this topic on our social media channels, or [contact us directly] with questions about the site.
Comment  |
Email This  |
Print  |
RSS
More Insights
Webcasts
Bolstering Your Enterprise Cyber Risk Assessment
Disaster Recovery/Business Continuity in the New Normal
More Webcasts
White Papers
The State of Zero Trust Security Strategies
How DevOps Delivers on User Experience with Observability
More White Papers
Reports
The State of Malware Threats
A Decade of Passive DNS
More Reports