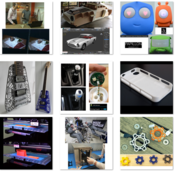 10 Cool Things 3-D Printers Can Do
(click image for larger view)
Google has issued another update for Glass, one that enhances the wearable computing device with a broader command vocabulary, more Google Now Cards and a variety of other software improvements.

Glass support for Google Now, the company's real-time personal assistant service, has been expanded with Cards that offer reminders about concerts, hotel bookings and dinner reservations. The device will also now present proximity-based Google Now Cards providing movie show times when the wearer is near a movie theater, or with Google public alerts when there's an emergency situation nearby.

[ ZTE plans to offer its Firefox-based smartphone, the Open, on eBay. Read ZTE's Firefox OS Smartphone Will Sell For $80. ]

The video player controls on Glass have also been improved, allowing Glass wearers to toggle between play and pause with a tap on the frame, and to go forward or backward in the video by swiping along the frame.

Google has also added a way to check your Glass timeline while conducting a video call. Swiping down along the device frame during a video call loads the timeline and puts the video call in the background. This disables the camera, preventing your view from being shared. To rejoin the call, simply tap on the active video call card to the left of your Home screen.

When sharing a picture or video, Glass users can add a caption by saying, "Okay Glass, add a caption" at the Okay Glass prompt. If you use the word "hashtag" while speaking a caption, Glass will convert it into the proper symbol. This is in addition to the "#throughglass" hashtag that Glass appends automatically to shared content captions.

If your friends aren't worth the effort of a birthday phone call, Glass is ready to help: "When calling to wish someone a happy birthday is too much, we've added the ability to send them a message instead," Google explains in the XE8 release notes. "Tap on a birthday reminder card and swipe forward to 'send a message.'"

Some of the Forrester analysts are pretty confident Google Glass will be a big deal-- as big a developer opportunity as iOS, according to one of their statements. I see the potential for wearable technology to be useful. A smartwatch, for instance, could be paired in interesting ways with other devices and services within an ecosystem. There's also excitement around contextually-aware mobile apps that talk to big data cloud systems on the back end. Wearable devices could obviously factor into this kind of app.

But I'm less convinced of the most bullish expectations, especially when applied to devices worn on the face. Anyone else more sure of Glass's big time potential?
Reply  |  Post Message  |  Messages List  |  Start a Board

Here's a link to a column we ran by someone advocating Google Glass. His main point: for Glass to be a business hit, it needs to be tied to the workflows employees use to get things done.

I have trouble seeing how Glass will ever be socially acceptable. Google should focus on making it useful without interaction (Google Now, etc). Anything that requires tapping and scrolling could just as well be done with a mobile phone.
Reply  |  Post Message  |  Messages List  |  Start a Board
InformationWeek Is Getting an Upgrade!