Google Maps Coordinate relies on Google's map data and collaborative technologies. Mobile workers, through an Android app, can access location-oriented data related to their jobs and administrators can monitor employee whereabouts and modify job-related data through a Web browser. The service even works indoors, via Google's indoor maps.

Chu anticipates businesses will make use of Google Maps Coordinate as a productivity tool on a daily basis. He suggested it can be used to track the resolution of a customer call in real time, for example.

Google said it has a number of beta customers testing the service but is unable to name them now. According to a company spokesman, the beta testers include a utility company, a city government, a pizza shop, and a large-scale telecom provider.

Google Maps Coordinate supports three roles: administrator, dispatcher, and worker. Workers can be organized in teams and can view assigned tasks through their Android device.

Dispatchers can add team members and see their locations. They also can create jobs and assignments, which will send notifications to workers near the job site. In addition, dispatchers and administrators can see past jobs and associated locations, which might be useful for optimizing local staffing levels or the placement of team members.

Chu said that an iOS version is in the works and that plans include support for iOS 6. Whether Google Coordinate for iOS will be a Web app, will fetch Google map data via HTTP, or will rely on Apple's map technology--the iOS MapKit API in iOS 6 drops Google's map technology for Apple-operated map services--was not immediately clear.

Chu said his team also is looking at geo-fencing as a possible future feature. 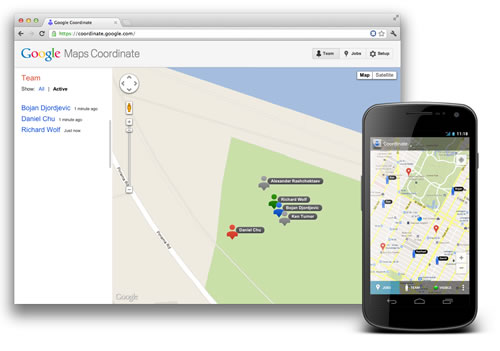 To assuage corporate concerns about data security, Chu said that Google Maps Coordinate encrypts application data at rest. He also said that the service has been designed to protect the privacy of mobile workers in three ways: Users must consent to activate Google Coordinate; they can disable it; and they can schedule it to stop reporting their location at particular times, such as the end of the work day.

Although Google Maps Coordinate is intended for business users, it doesn't require Google Apps to use. The service will be offered for an introductory price of $15 per user per month until September 1, 2012. Pricing thereafter has not been determined.

Cloud Connect is expanding to the Windy City. Join 1,200+ IT professionals at Cloud Connect Chicago, where you will learn how to leverage new cloud technology solutions to increase productivity and improve your business agility. Join us in Chicago, Sept. 10-13. Register today!