Google makes several announcements, including its mobile virtual reality platform Daydream, that reveal its long-term strategy to bring VR to the masses.

Google is plunging deeper into the world of virtual reality. The company announced at the Google I/O developer conference this week it is baking native support for VR into Android N. It also released a new VR development platform, and even previewed a VR-focused version of YouTube. It's safe to say that Google has a vision for virtual reality that is coming into focus.

Daydream sits at the center of Google's VR strategy. The Android-based platform is meant to set some baselines for the hardware and software needed to make for a good end-user experience. Daydream's roots can be found in Google Cardboard.

Google debuted Cardboard at its I/O conference two years ago. The cheap, foldable VR viewer was Google's first real foray into VR from a hardware perspective. People could pick up a Cardboard viewer, generally for less than $20, stick their phone in it and enjoy a modest -- if low-resolution -- VR experience. Daydream represents a big step forward.

Daydream puts in place a handful of specs, such as processor speed, screen resolution, and pixel-pushing power to ensure strong performance. Several hardware makers, including Huawei, Samsung, and Asus, have signed on to field Daydream-compatible handsets later this year. Google said the Huawei-made Nexus 6P will serve as the basic handset development platform for Daydream. 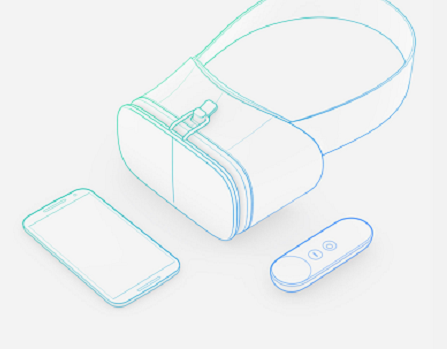 "We are working with a number of smartphone manufacturers to create a specification for Daydream-ready phones," Google explained in a blog post. "These smartphones enable VR experiences with high-performance sensors for smooth, accurate head tracking, fast response displays to minimize blur, and powerful mobile processors. Daydream-ready phones take advantage of VR mode in Android N, a set of powerful optimizations for virtual reality built right into Android."

Daydream also includes a VR headset. The hand-drawn headset sketch Google showed off looked decidedly low tech, but other hardware makers are on board to create Daydream headsets, too. In fact, Google will compete directly with its partners on this front, and that's fine.

The new beta of Android N, released by Google on Wednesday, has virtual reality tools buried in the settings menu. Daydream will depend on Android N, which means only newer handsets will likely have access to Daydream-based content.

With Daydream not scheduled to make its full debut until the fall, Google's YouTube is preparing content. The company today announced YouTube VR, a special version of the video site that will let people find and view VR content. Google said YouTube VR will support most of the features already available to the main service, including search, browsing, and playlists/subscriptions. What's more, Google says all the content on YouTube will be viewable through VR headsets, even if that content was not created specifically for VR.

Google is, of course, encouraging developers to start building for Daydream. The Google VR SDK, for example, now includes a C++ NDK. Daydream is supported natively in the Unreal and Unity engines.

By the time the fall months roll around, the Daydream phones, headsets, apps, and games should all be coming together nicely. Until then, we'll have to make do with Samsung's Gear VR or the trusty old Cardboard.

Amazon Alexa and Echo seem to be off to a fast start. possibly because they seem like such a natural extension of the Amazon online ordering process. Instead of filling in the form, issue a verbal command. Google may have a little less success in conviincing customers that a voice activated device is a completely natural addition to what it's doing.
Reply  |  Post Message  |  Messages List  |  Start a Board
InformationWeek Is Getting an Upgrade!