Want harmonious SharePoint collaboration from your desktop or your iPad?

Harmon.ie, the maker of a SharePoint plugin for Outlookand a SharePoint iPad client released in May, says the software can work together even if Microsoft and Apple do not.

Apple has limited interest in supporting Microsoft products like SharePoint, while Microsoft is busy pushing its new Surface Tablet as an iPad alternative, Yaacov Cohen, CEO of Harmon.ie, said in an interview, adding, "Customers don't necessarily see competition being beneficial if it comes at the expense of SharePoint apps being available on the iPad."

Harmon.ie markets its Outlook extension as a way for enterprises to project document and social collaboration around the SharePoint environment into the email client, where users spend so much of their time, with SharePoint interactions are displayed as a sidebar. Harmon.ie Connect, which was released Wednesday, synchronizes settings such as favorites and followed documents between the desktop client and the iOS version. Cohen said Harmon.ie supports both the iPhone and iPad, although "the iPad is a more strategic platform for document collaboration."

[ What's the point of social business? Read Time To Dismantle The Corporate Machine. ]

Harmon.ie has also promoted its software as adding social features beyond those provided by SharePoint itself. This will presumably be less of a selling point going forward given the stronger social features in SharePoint 2013. However, Cohen said, there is still room for Harmon.ie to build on what Microsoft offers, and the limited support for iOS presents a big opening. "SharePoint is doing a really nice job as a platform of becoming more complete, but what users are saying is that is not enough. They want the exact same user experience on the go that they have on their desktop. I'm the same person at the office that I am on the road," he said.

Beyond synchronizing settings between the desktop and mobile clients, Harmon.ie plans in future releases to adapt the collaboration experience for the mobile environment, according to Cohen. That would include adapting to the device you are using, as well as using clues such as velocity to determine whether you're traveling or stuck in traffic. "When on the go, you may not be as open to be overwhelmed with information as you are on a desktop," he said, "so [enhancing the experience with contextual cues] is probably the next step." 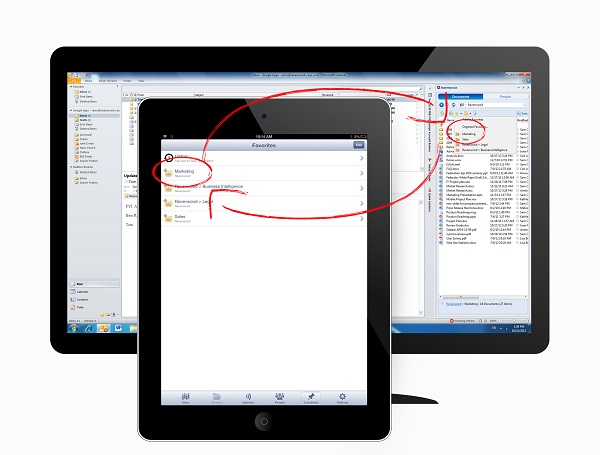 Harmon.ie Connect synchronizes settings such as favorites between Outlook and the iPad app.