The CDMA version of the HTC Desire Z, known in the U.S. as the T-Mobile G2, may be joining the carrier's lineup based upon leaked photos and a model number.
Esther Shein
Contributor
September 28, 2010 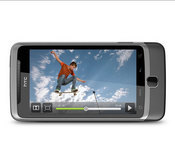 HTC Desire Z
Verizon Wireless is reportedly adding some Android-powered devices to its handset lineup soon, including one believed to be the HTC Desire Z, according to published reports.

The Desire Z has been announced by T-Mobile as the T-Mobile G2 and the recently spotted device could be the CDMA version of the Desire Z/G2, known as the HTC Merge, based on the model number ADR6325 seen in leaked photos of the handset, various reports noted. However, the keypad of the Merge and the G2 have different layouts.

The device features a 5-megapixel camera on the back, microSD slot, and SIM slot for global roaming. The device runs Android 2.2 (Froyo) and should come with a Qualcomm MSM7630 processor or an 800-MHz Snapdragon processor, a 3.8-inch display, and 4GB of internal memory, reports said.

One of the more intriguing features of the device is the appearance of Microsoft's Bing search engine; a logo can be seen on the phone's screen. Some reports are theorizing that Microsoft may have reached a deal with Verizon, despite the fact that the ADR6325 is running Android. It is also not clear whether the device will include the new HTC Sense UI, developed for Android, Brew and Windows Mobile-run devices to allow users to personalize content. The HTC Hero, launched last year, was the first Android phone to incorporate the feature.

The HTC ADR6325 device may be the same dual-mode handset that was seen at the FCC, published reports said. It also has a QWERTY keyboard. While pricing information and a release date have not been given, reports indicate the device could arrive at Verizon in either late October or early November and cost around $199 with a two-year contract.