The manufacturing cost of the Apple iPhone SE totals about $160, according to a teardown by IHS. At the same time, torture tests suggest the new phone isn't as tough as bigger Apple iPhones.

Apple's latest smartphone doesn't cost the company all that much to make. The parts and labor to assemble it total $160, which is much less than the $399 retail price. Even so, Apple took steps to mitigate risk with this device, claims IHS, which provided the teardown analysis.

The A9 processor, says IHS, cost Apple about $22. It is manufactured by Samsung and Taiwan Semiconductor Manufacturing Corp. The display, which comes from LG (and probably Sharp and Japan Display), costs as little as $20. IHS says that's as much as the display cost in 2013 ($41) when Apple first debuted the iPhone 5s. The Qualcomm-sourced baseband radio comes in at about $15, and the storage module costs just $10. Totaling these and other costs puts the 16GB version of the iPhone SE at around $160, and the 64GB version of the SE at around $170. The phones sell for $399 and $499, respectively. 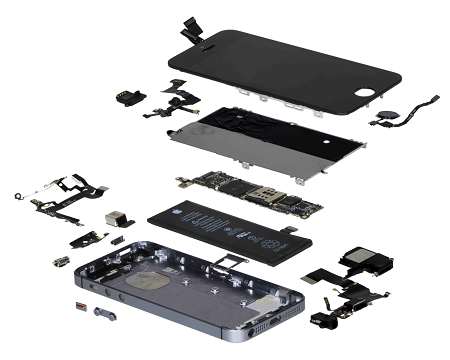 Apple wants people to buy the 64GB model to improve its profit margins.

"The potential profit margin on the 1GB phone is lower than it is on the 64-GB version," IHS analyst Andrew Rassweiler said, according to Re/code. "Apple is selling the phone with the higher storage for $100 more, but [at] only about $10 in additional cost."

Rassweiler further suggests that Apple's decision to reuse the inexpensive 4-inch screen from the iPhone 5s is meant to help keep costs as low as possible. "It's very much in Apple's interest to control costs if it's not sure this its latest approach at this market niche is going to work," explained Rassweiler. "This is a low-risk way to test the waters of a lower price band of the market."

The iPhone 6s starts at $649 and the 6s Plus starts at $749. The iPhone SE is smaller and cheaper than these iPhones. Apple believes consumer interest in the 4-inch size remains strong. The updated specs gives people holding onto the iPhone 5, 5c, or 5s a reason to upgrade. The more attractive price point may also help spur interest in the iPhone SE. Demand in the US might be slow, according to some analysts, but may be stronger in India and China.

iPhone SE buyers should know that the device isn't as durable as the larger iPhones. New torture tests prove the chassis is weaker and more prone to water damage. You can watch the painful video here.