The televisions, which combine access to TV programs and Internet content, will be available by the end of the year.
Esther Shein
Contributor
November 17, 2010 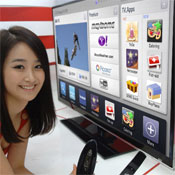 Smart TVs will be rolled out at the end of the month from LG Electronics, the Korean Herald is reporting.

The world's second-largest TV maker originally planned to debut smart TVs early next year, but pushed the release date ahead of schedule due to competition from its rivals, the paper reported Tuesday. First up will be 55-inch TVs, a spokesman for LG Electronics told the newspaper, which should be in stores in December. Although pricing information wasn't given, the company reportedly said it would be in line with its competitors' prices.

Rivals Samsung and Sony have already launched smart TVs, with the former announcing in October plans to come out with a single software platform that will combine content on its TVs and smartphones. Also last month, Sony introduced its new line of Google Android-powered Internet TVs, which provide access to TV and Internet content, along with Android apps.

At the IFA show in Berlin in September, LG said its smart TVs would mix connectivity to the Internet with ease of use and have a "home dashboard" and intuitive user interface. The home dashboard will give viewers the ability to select the content they want quickly without having to browse several websites, the company said.

"With the introduction of our advanced Smart TV, LG is able to offer a 'Total Home Entertainment Solution' enabling consumers to enjoy practically any digital content on any smart device," Simon Kang, president and CEO of LG home entertainment, said in a statement at the time. "For consumers who want full control over how and where they get their entertainment with maximum ease and comfort, the LG Smart TV solution may be all they need."

Some 100 million units are projected to be sold by 2013 as demand continues to increase for smart TVs integrating electronic devices with services, according to industry research. LG Electronics said in September that it hopes to sell up to 40 million flat-screen TVs, a figure that would be boosted with smart TVs.

In related news, the company also announced Tuesday that worldwide sales of its Optimus One smartphones, powered by Android 2.2 Froyo, have sold one million units 40 days after the phone was launched. The company said it expects the Optimus One to be its first smartphone to hit 10 million units sold. LG Electronics is the third-largest handset maker globally and its mobile phone unit has been struggling to stay competitive after experiencing a third-quarter operating loss.