Adobe is bringing its Comp CC layout application to the iPad through the Apple App Store, giving designers another mobile option for their needs.

Software giant Adobe is reaching out to Apple-centric designers with its Comp CC application for the iPad, an app that enables the rapid creation of layout concepts for mobile, Web, and print projects.

The free app, which is available for download through the Apple App Store, lets users export a native file to the designer's choice of InDesign CC, Photoshop CC, or Illustrator CC. That file automatically opens on the desktop, letting users build on their original idea.

Built on the Adobe Creative SDK, Comp CC, which is available in 15 languages, couples gestures, fonts from Typekit, and the personal assets stored in Creative Cloud Libraries.

Gesture controls are a major element of the app. For instance, users can trace a quick outline for basic shapes or editable text boxes, and mark it with an "X" to make an image frame.

Another gesture control allows users to drop in lines of placeholder text by swiping a finger across the tablet's screen.

Users can also import saved asset collections from Creative Cloud Libraries or ready-made vector graphics and icons from the Creative Cloud Market. The use of Adobe mobile apps requires a free, basic level of Creative Cloud membership, which includes 2GB of complementary storage for file syncing and sharing. 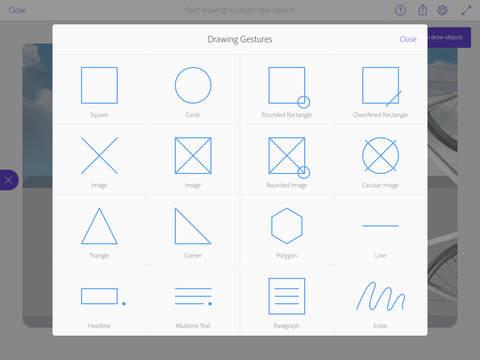 For users requiring more than 2GB of Creative Cloud file storage, the company offers the option of purchasing an additional 20GB for $1.99 a month. The recurring payment is automatically charged to the user's iTunes account.

Adobe is also working to improve integration between its applications, giving users the ability to access graphics they have created in Photoshop or Illustrator or drawings from Photoshop Sketch and Illustrator Draw. They can also pull in what they've captured in Shape CC and Color CC.

Another major concept of the app is ease of management. A single source file and included history mean that every version of every layout is saved. This feature is designed to help creators avoid taking up storage space with files that will only be discarded later.

"Comp CC takes advantage of the iPad's advanced touch screen with an intuitive interface and makes the beginning of the design process integral to the finished result," Scott Belsky, vice-president of products at Adobe, wrote on March 30 in the company's blog. "Doing creative work on a mobile device is only useful if the results can be opened on the desktop, where the project can be perfected in a precise, professional-grade tool like InDesign or Photoshop."

Similar to Adobe's family of Creative Cloud mobile apps, Comp CC can be used on an individual basis. It can also be used by a creative team within an enterprise. It has support for Federated ID single sign-on (SSO), in which a user's individual authentication token is trusted across multiple IT systems or organizations.

The company started work on the project, previously called LayUp, about two years ago, and previewed the software at its MAX conference.

Adobe also noted that a major update to Creative Cloud is expected in the coming months. It will introduce new ways for users to connect their creative work across mobile and desktop, while boosting productivity efficiency.

Nathan Eddy is a freelance writer for InformationWeek. He has written for Popular Mechanics, Sales & Marketing Management Magazine, FierceMarkets, and CRN, among others. In 2012 he made his first documentary film, The Absent Column. He currently lives in Berlin. View Full Bio
We welcome your comments on this topic on our social media channels, or [contact us directly] with questions about the site.
Comment  |
Email This  |
Print  |
RSS
More Insights
Webcasts
Building Asset Management into Your Enterprise Security Strategy
Take DevOps to the Next Level
More Webcasts
White Papers
Lessons Learned Investigating the SUNBURST Software Supply Chain Attack
From MFA to Zero Trust
More White Papers
Reports
2021 Application Security Statistics Report Vol.1
DNS Network Traffic Volumes During the 2020 Pandemic
More Reports