According to Apple's App Store Review Guidelines, Android Wear for iOS should not be possible. Apple's rules state, "Apps or metadata that mentions the name of any other mobile platform will be rejected."

Android Wear for iOS clearly violates this rule, particularly given that Apple's language doesn't hedge. It's not "may be rejected," it's "will be rejected."

Yet, Google and Apple have found a way to live with one another. In an email, a Google spokesperson said, "We've worked with Apple to make sure this fits their guidelines."

It has been clear for some time that Apple doesn't want to press the issue. In April, when it appeared that Apple had disallowed an iOS app for the Pebble smartwatch, Apple clarified that the rejection had been a mistake.

[ How will drones transform the urban landscape? Read Drones: 10 Novel Uses For Your City. ]

Entering the term "Android" into the App Store search box on Aug. 28 returned 42 results, so there's clearly not a blanket prohibition on any mention of Google's mobile platform. Presumably, Apple has retained its contractual language to deter developers who might try to use their App Store listings to promote Google Play apps or to engage in other marketing abuses. 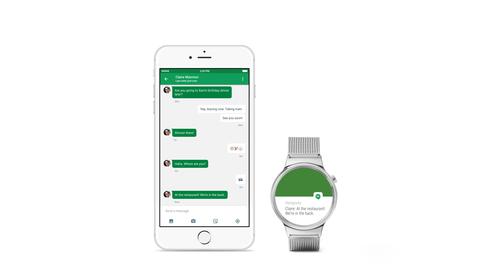 In a blog post heralding the détente, Google noted that Android Wear offers "countless design choices." That may be, but iOS users seeking a compatible Android Wear device have only one choice at the moment: the LG Watch Urbane.

However, future Android Wear watches from the likes of Asus, Huawei, and Motorola will work with the iOS app, according to Google.

Despite Apple's forbearance, Android Wear faces a formidable competitor. The Apple Watch debuted in Q2 and, according to IDC, accounted for two out of every three smart wearables shipped during the quarter. The firm estimates that 3.6 million Apple Watches shipped in the second quarter, a wearable shipment figure exceeded only by Fitbit.

The Android Wear cause hasn't been helped by Samsung's shift of focus toward smartwatches running its own Tizen operating system. Among the top five sellers of wearables in Q2 -- Fitbit, Apple, Xiaomi, Garmin, and Samsung – there's not much passion for Android Wear.

Thomas Claburn has been writing about business and technology since 1996, for publications such as New Architect, PC Computing, InformationWeek, Salon, Wired, and Ziff Davis Smart Business. Before that, he worked in film and television, having earned a not particularly useful ... View Full Bio
We welcome your comments on this topic on our social media channels, or [contact us directly] with questions about the site.
Comment  |
Email This  |
Print  |
RSS
More Insights
Webcasts
5 Ways to Jumpstart AI
[Free Virtual Event] Using Microsoft in 2020 & Beyond
More Webcasts
White Papers
Get The Key to Cloud Success
Cabinet-Level Electronic Access Control for Data Security and Compliance
More White Papers
Reports
Global Cloud Proxy Enables VPN Split Tunneling
State of Cybersecurity Incident Response
More Reports

Apple is doing the right thing here. Altough Apple has its own ecosystem, the big user foundation for Android wearables is not neglectible.
Reply  |  Post Message  |  Messages List  |  Start a Board

IMHO, I don't consider Apple at the forefront of smart ware. It may currently be the more robust, but do to the high price tag, and there being other options, it'll take awhile before it can consider itself at the top of the mountain.

I love gadgets, and the apple watch still doesn't appeal to me. I have a fitbit and that provides the level of functionality that I need at a price point that I wouldn't mind getting a second one (either replacement or upgrade)

Will Apple willingly give access to Google to link with their hardware and software while they are already in the smartwatch market.
Reply  |  Post Message  |  Messages List  |  Start a Board

Great to see android wear expanding so fast. Users now no longer need to buy an apple watch to get the smartwatch experience.
Reply  |  Post Message  |  Messages List  |  Start a Board

I think what this does is simply allowing for more players to enter the battle field and duke it out.

I know I would definitly opt for an android wearable devices since I'm a heavy user of google products...aside from the fact that it's more accesible on the money side.

One thing I'll admit...Apple is definitly listening to it's users. By allowing android to be part of the app store is a welcome to many.