Apple Pay in China Is A Whole New Game - InformationWeek

Apple Pay will be available Feb. 18 in China, where it will face entirely different challenges from those it has in the US.

Apple Pay is about to become available in China, the world's largest smartphone market and one in which consumers already have favorite mobile payment services.

Mobile payment transaction volume in China reached approximately $352 trillion during the second half of 2015, up 66% from the year before, according to the South China Morning Post (SCMP).

Reuters, The Guardian, and others were quick to report that Industrial and Commercial Bank of China (ICBC), China's biggest lender by assets, took to social media earlier this week to announce that Apple Pay will launch Thursday, Feb. 18.

While in the US Apple faces the challenge of getting Americans to try a new technology and change old habits, in China it will need to draw away consumers from their current favorites.

"It's too late for anyone to enter this market right now," Will Tao, a senior research manager at iResearch, told SCMP in January. "No one is going to add another payment app to their phone, even if [the service is] state backed." 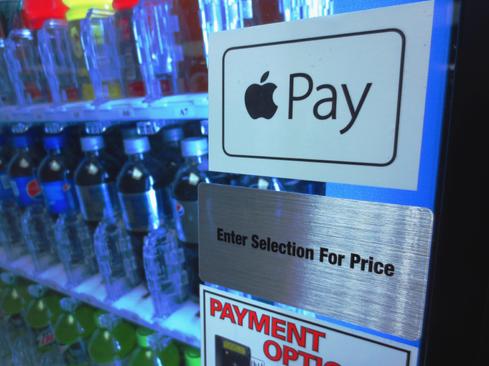 In December Apple announced it had the support of China UnionPay and 15 other leading banks, and would begin rolling out Apple Pay in "early 2016."

Apple launched Apple Pay in the US in October 2014, and later in Canada, the UK, and Australia. Apple Pay got off to a slow start. During the second half of 2015, its growth rate was "10 times higher than in the first half of the year," CEO Tim Cook said during a Jan. 26 earnings call.

With revenue from iPhone purchases expected to slow in 2016, Apple hopes to compensate with revenue from its Services segment, which includes Apple Pay, iTunes, iCloud AppleCare, and Apple Music.

"Apple smartly tethered these products and services groups to the iPhone, enabling their growth to coincide with growth of the iPhone," Technology Business Research (TBR) analyst Jack Narcotta wrote in a Jan. 28 research note. "As users become ingrained in Apple's ecosystem, they are more likely to make additional purchases of media, content, services and applications. Apple has exploited this propensity of its customers since the introduction of iTunes in 2001."

In the US, Apple Pay users are "fanatically satisfied," Marianne Berry, managing director of Auriemma's Payment Insight Practice said in a July report, following a June survey of 500 consumers with access to Apple Pay.

"The people who are using Apple Pay aren't just satisfied. They are in love," Berry added.

The survey also found use of Apple Pay to be higher among consumers who had purchased their iPhones or Apple Watch at Apple stores (67%), versus those who made the purchase through a carrier store (29%).

[Read more about the rush to bring mobile payments to China.]

"Most of the carrier stores are not that invested in the success of Apple Pay," Berry added.

The degree to which banks in China are invested in that success remains to be seen. The two largest payment companies in China today are Alibaba, which supports Alipay, and social networking firm Tencent Holdings, which supports WeChat Payment.

But WeChat, which has roughly 550 million monthly active users, is far more than just a mobile payments platform. It's foremost an app for sending text, phone, and photo messages. Which will make Apple’s task all the more difficult, even with strong support from the banks.

Its success, Connie Chan wrote on the Andreessen Horowitz blog in August, stems from its app-within-an-app model, which makes the WeChat Wallet part of a curated selection of service providers.

"I cannot emphasize the importance of this Wallet enough," Chan wrote. "It's the Trojan horse that allows WeChat to quickly onboard user payment credentials that then unlock new monetization opportunities for the entire ecosystem."

It's already on many Apple devices. During a recent Apple earnings call, Chan notes, Cook called WeChat "one of the top third-party apps used on the Apple Watch."

Apple hasn't acknowledged the news of a China launch and didn't respond to a request for comment.

Michelle Maisto is a writer, a reader, a plotter, a cook, and a thinker whose career has revolved around food and technology. She has been, among other things, the editor-in-chief of Mobile Enterprise Magazine, a reporter on consumer mobile products and wireless networks for ... View Full Bio
We welcome your comments on this topic on our social media channels, or [contact us directly] with questions about the site.
Comment  |
Email This  |
Print  |
RSS
More Insights
Webcasts
Detecting and Preventing Insider Data Leaks
People Are The Most Important Part of Autonomous SOC
More Webcasts
White Papers
Why Add Security to Your Skill Set and How to Do It
Key Strategies for Managing New Risks in Cybersecurity
More White Papers
Reports
Improving Security by Moving Beyond VPN
Building the SOC of the Future
More Reports

""Apple smartly tethered these products and services groups to the iPhone, enabling their growth to coincide with growth of the iPhone,""


And the decline of the iphone. Apple's so called services  are tied to the hardware , at least the ones with high margins so the decline will come all at once and they might have peaked in 2015 , remains to be seen if iphone sales can recover in 2017.

In China, iphone models able to use Apple Pay are likely at 70-90 million units, with so little share and negative outlook, they can't get anywhere.
Reply  |  Post Message  |  Messages List  |  Start a Board

shifting people from their current method of payment to digital payments is much harder than tech companies realize.  I believe Chinese companies won't make it easy for them to enter in their market either.  Any ideas why online payment hasn't taken off here in the states as tech enthusiast predicted.
Reply  |  Post Message  |  Messages List  |  Start a Board
Editors' Choice
Hot Topics