A Wristly survey indicates those who own an Apple Watch find the company's contactless payment platform, Apple Pay, to be a solid match.

While various analyst reports suggest Apple's latest gadget, the highly publicized Apple Watch, hasn't been a blockbuster success, a survey indicates those who do own the device are using another one of the company's much-touted technologies -- contactless payment -- in droves.

The survey of more than 1,000 consumers in the United States and United Kingdom, which was conducted by Wristly, found that 80% of Watch owners are using Apple Pay.

Wristly's survey of Apple Watch owners found that while the vast majority used Apple Pay first with their iPhone, around 19% of respondents, or a quarter of those who have used Apple Pay, first tried it on their Watch.

Of the 19% who have not yet used Apple Pay, about 5% reported they can't see a benefit in using the technology, while another 5% cited security concerns. However, another 15% said that their payment needs were already being met, indicating a quarter of Apple Watch users may never need the service. 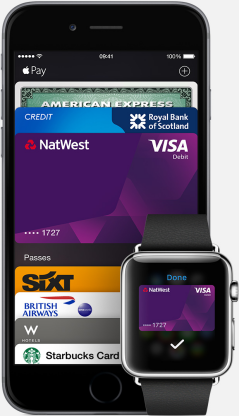 The service lets Apple devices, including the iPad, iPhone 6, iPhone 6 Plus, and Apple Watch, wirelessly communicate with point of sale systems using a near field communication (NFC) antenna. There's also a dedicated chip that stores encrypted payment information that works with Apple's Touch ID and Passbook.

"Another interesting insight we learned is that Apple Pay most commonly gets tried first in the physical world of retail as opposed to use to complete an in-app purchase," Wristly co-founder Bernard Desarnauts wrote in an Aug. 18 blog post. "Our research indicates that interest in Apple Pay is high and suggests many more will use the service when their bank supports it."

The survey also revealed 62% of Apple Pay users reported a preference for doing business with merchants due at least in part to that store's decision to support Apple Pay.

[Read about how Rite Aid is adopting Apple Pay.]

"Should the Watch continue to become a more mainstream device, this new behavior will most likely create further marketing pressure on those retailers holding back," Desarnauts commented.

While the survey suggests Watch owners are satisfied with Apple Pay, a recent survey by PYMNTS.com and InfoScout indicated the platform is struggling overall. The company's third report on Apple Pay consumer adoption shows that the percentage of those who actually use the service has dropped.

In March, 15% of users said that they have used Apple Pay and 39% of those users surveyed said they used the service during a specific transaction.

However, when the survey was taken again in June, the number of people who have used Apple Pay dropped to 13% and just 23% who used the service during the transaction in question, indicating that just 3% of iPhone 6 or iPhone 6 Plus owners use Apple Pay at stores that take it.

Nathan Eddy is a freelance writer for InformationWeek. He has written for Popular Mechanics, Sales & Marketing Management Magazine, FierceMarkets, and CRN, among others. In 2012 he made his first documentary film, The Absent Column. He currently lives in Berlin. View Full Bio
We welcome your comments on this topic on our social media channels, or [contact us directly] with questions about the site.
Comment  |
Email This  |
Print  |
RSS
More Insights
Webcasts
Unifying Your Endpoint Security Strategy
Managing Your Enterprise Collaboration Platforms
More Webcasts
White Papers
Using Zero Trust to Protect Today's Remote Workforce
Incident Readiness and Building Response Playbook
More White Papers
Reports
The State of Malware Threats
2021 Digital Transformation Report
More Reports