4 comments
Comment Now
InformationWeek was on hand at Apple's Worldwide Developers Conference 2015 in San Francisco Monday to hear all about about OS X, iOS 9, and watchOS. Here are our 10 favorite moments from the conference. 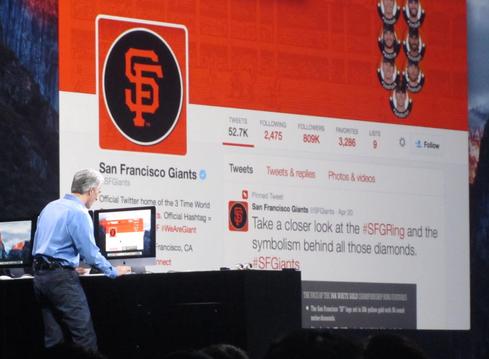 Apple's SVP of software engineering Craig Federighi shows off OS 10.11, known as El Capitan. The revised Mission Control tools will make it more fun to switch between apps. There's even a neat tool for running apps side by side.


I am CONTINUOUSLY amazed at Apple's marketing success! As a Windows user and developer, when I read what Apple touts as "wonderful new innovations", I am shocked that the reviewer seems to be so ignorant of what Windows developers have had available to them and, if they are competent, have been using for so many years! 'Mission Control will make it more fun to switch between apps', well, duh! 'Apps side by side' and 'split screen', yikes, this is considered to be new? 'Siri links to your schedule', huh, new? iOS9 'will give walking times from transit stations'; hasn't the reviewer used Google Maps once in the last dozen years? And the rest of the "innovations" are about Apple using Apple's new financial tie-ins to make even more money from the gullible Apple devotees. And don't users realize that Apple takes 30% of app developer revenues? 30% - that's downright highway robbery!


How much longer can marketing hype prop up a company that sells mediocre-quality hardware at wildly inflated prices? Compare the "wonderful" Mac Pro at $4,999 (with an incredibly limited number of options, no expansion capability, no upgrade path and, of course, only ONE supplier) to a wide selection of Windows hardware, with infinite expandability and from multiple suppliers, priced between $1,800 and $3,000. Spend $5,000 on a Windows computer and you will have something that will make the Mac Pro look like what it is: an expensive child's toy.


All that Apple has going for it is that their products are pretty and cute. Hasn't anybody noticed that the company has quit their marketing hype that Apple computers were somehow magically immune from viruses? Recent statistics show that virus developers have realized that the 94% of computers that are using Windows have become progressively more difficult to attack, and that the 5% of computers running Apple OS have been wide open all along; most viruses are now attacking those 5% using Apple's OS!


And when the CEO of a company's summary of their financial state is "Everything is going great!" without providing any details, I immediately start divesting my portfolio of those shares. It is abundantly obvious that things are not so great when the CEO is merely falling back onto hype in his presentations (yet again) ...

Nice move by Apple. In iOS9 Apple has done some great changes and improvements. Now I am very curious to see the fight between iOS9 beat Android 6.
Reply  |  Post Message  |  Messages List  |  Start a Board

WatchOS 2.0 looks like an improvement. The watch is not so tied up to the iPhone now. Perhaps it can attract a few more customers.
Reply  |  Post Message  |  Messages List  |  Start a Board

When everything is really going great, Apple trumpets the numbers. I can only conclude that Watch sales were not impressive enough to celebrate.
Reply  |  Post Message  |  Messages List  |  Start a Board
Editors' Choice
Hot Topics