Apple's ResearchKit is an open-source framework designed for the healthcare and fitness markets as a way to collect data and analyze larger groups of patients.

In its bid to conquer the burgeoning high-tech health and fitness market, Apple announced the release of its open-source ResearchKit software framework this week.

ResearchKit is designed to help doctors, other medical professionals, and scientists gather data more frequently and more accurately from participants using iPhone apps, and the software enables researchers to contribute to specific activity modules in the framework, like memory or gait testing.

Many of the apps built with ResearchKit will enable users to track their own data and potentially discover correlations between symptoms and daily actions, such as diet or exercise, and the platform lets users choose what studies they want to join.

Users are in control of what information they provide to which apps and can see the data they are sharing, and in an effort to address consumer privacy concerns, the company will never see the user's personal data. 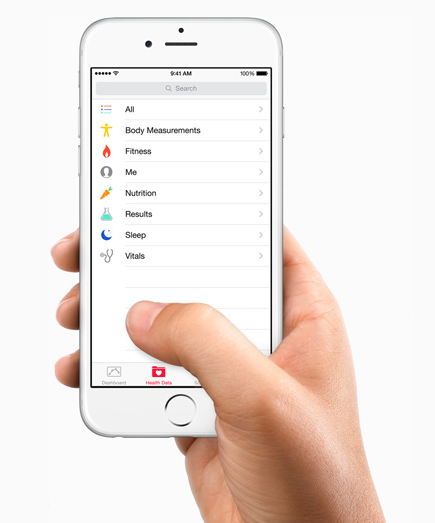 Researchers can use the survey module to customize questions and answers for study participants to complete, while the active tasks module lets researchers gather more targeted data, such as motor activities, fitness, cognition and voice, for their study by inviting participants to perform activities that generate data using iPhone's advanced sensors.

The consent module lets researchers access a customizable virtual consent template that explains the details of the study.

In addition to obtaining participant signatures, the module also lets researchers include elements such as video segments explaining the study and an interactive quiz to confirm the participant's understanding.

The company noted that it's iPhone 5 and 5s, iPhone 6, iPhone 6 Plus, and the latest generation of iPod touch devices, all support ResearchKit apps.

Apps built with the framework can also access data from the iPhone's sensors, including the accelerometer, gyroscope, microphone, and GPS in order to gather data related to a participant's activity levels, motor impairments, or memory.

For instance, Parkinson mPower, developed by Sage Bionetworks in collaboration with University of Rochester and Beijing Institute of Geriatrics, helps track Parkinson's symptoms by recording activities using sensors in the phone, such as finger tapping, speaking and walking.

In addition, ResearchKit can tap into the pool of data generated by HealthKit, a tool that allows health and fitness apps on the iPhone to work together -- provided the user gives consent.

[ Read the reviews of the new MacBook.]

The launch of ResearchKit was one of several pieces of Apple new that trickled out this week. The first, and most important, is the Worldwide Developers Conference, which is set for June 8, and will feature new details on iOS and Mac OS X.

In addition, Apple has reportedly acquired Israeli tech company LinX, which specializes in technology that could improve cameras on mobile devices like notebooks and tablets.

"LinX cameras not only capture 2D images but also acquire very accurate depth information of the complete scene," according to the LinX website. "We allow Apps to freely use the 3D information captured by our camera to achieve amazing new features such as the ability to refocus an image after it has been captured, measurement of the true dimensions of objects, 3D object modeling and real time background replacement for video calls."

The Wall Street Journal reported Apple paid $20 million for the company, which it said Apple confirmed.

Nathan Eddy is a freelance writer for InformationWeek. He has written for Popular Mechanics, Sales & Marketing Management Magazine, FierceMarkets, and CRN, among others. In 2012 he made his first documentary film, The Absent Column. He currently lives in Berlin. View Full Bio
We welcome your comments on this topic on our social media channels, or [contact us directly] with questions about the site.
Comment  |
Email This  |
Print  |
RSS
More Insights
Webcasts
How Elite Analyst Teams are Transforming Security with Cyber Reconnaissance
Making Cybersecurity Work in Small and Medium-Sized Businesses
More Webcasts
White Papers
Cyber Threats & Trends: Jan-June 2020
The Insider's Guide to IP Geolocation Data During COVID-19
More White Papers
Reports
Assessing Cybersecurity Risk in Todays Enterprises
The Drive for Shift-Left Performance Testing
More Reports

There was another article published right here on InformationWeek, today, that describes IBM's important role is this process. ResearchKit and HealtheKit will transfer the information collected to IBM's Health Cloud, where the identity of the person observed will be stripped out, and then the relevant parts will be organized there and made avaialable to researchers.
Reply  |  Post Message  |  Messages List  |  Start a Board

I feel impressed about the potential benefit it can bring to the public. But I do have the same concern here - how can we guarantee that personal health information will not be abused?
Reply  |  Post Message  |  Messages List  |  Start a Board

While I love the potential this type of functionality brings, such as being able to get more information on a patient's health through longer monitoring periods, I gotta bring it up, it's going to be an interesting security conversation once these applications launch.

We know there are a lot of security risks that come from smart watches, and while it might not really seem like a big deal if someone gets a hold of your heart rate information, exercise information, what about the back end systems it is going to transmit to?  Sadly, many applications aren't created with security at the forefront, which means while more apps and functionality is great, we are going to see a lot of new issues when it comes to privacy.
Reply  |  Post Message  |  Messages List  |  Start a Board
Editors' Choice
Hot Topics