The Swift programming language is becoming more popular and, in time, may find a home on corporate servers. The Swift Playgrounds iPad app will play a major role in that.

Apple's Swift programming language is becoming more popular, but its future outside of Apple's ecosystem isn't yet assured.

To encourage more people to learn and use Swift, Apple announced an iPad app called Swift Playgrounds that the company plans to release this fall when iOS 10 debuts. Swift Playgrounds, written in Swift, takes the concept of Xcode Playgrounds -- a form of read-eval-print loop, or REPL -- and expands it by adding graphics and specific challenges designed by Apple to teach important language concepts.

"Because Swift is so easy to learn, it has the potential to bring many more people into coding," said Cook, who noted that over 100 WWDC attendees this year were under 18, with the youngest being age 9. 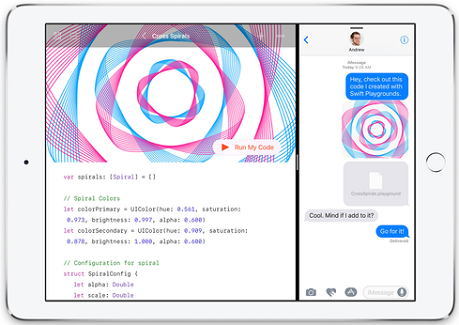 "We believe it's crucial that we provide the best tools, so you can create the best apps," said Cook. "That's why we created Swift. Swift is a powerful and intuitive programming language for iOS, macOS, watchOS, and tvOS."

Forrester analyst Michael Facemire, in a phone interview with InformationWeek, said it was noteworthy that Cook mentioned Swift only in the context of Apple's platforms. Despite efforts by IBM and PerfectlySoft to promote Swift as a full-stack language, he said, Swift is still seen mainly as a front-end language for Apple platform apps.

Swift has been welcomed by Apple developers because "the bar was set so low with Objective-C in terms of usability and developer enjoyment," said Facemire.

"I think there's a good chance Swift will get some traction in the enterprise for the same reason that JavaScript and Node.js have gained traction," said Gartner analyst Van Baker in a phone interview with InformationWeek. Developers, he explained, like the idea of using the same language in both front-end and backend code.

The big question is whether Google will encourage Android developers to develop Android apps in Swift and provide the necessary support.

"IBM keeps telling us people will start developing Android apps using Swift between now and the end of the year," said Baker. "I'm a little skeptical until I see it."

John Ponzo, IBM Fellow and CTO for Mobile, in a phone interview with InformationWeek, said Swift has a variety of benefits like type safety, which makes code less prone to errors. "We think there are a lot of advantages to a language like Swift," he said, noting that developers have run code in IBM's Swift Sandbox more than 1.5 million times since last December.

There aren't a lot of companies using Swift for backend services outside of pilot tests. One, said Ponzo, was City Furniture in Florida. But as Apple continues to work with partners like IBM and SAP, experiments can be expected to turn into internal or customer-facing deployments before long.

Google did not immediately respond to a request to say whether it intends to support Swift as a first-class language for developing Android apps.

Asked whether he believes Google will adopt Swift, Ponzo said only that IBM is encouraging the open source community to make Swift more broadly useful.

Sean Stephens, CEO of PerfectlySoft, insisted in a phone interview, "Swift is inevitable. There's no stopping it. You can understand it easily. It writes almost like English. There are all sorts of natural benefits."

Swift can save enterprises money, Stephens said, because Swift apps are compiled code. With an app written in a language like PHP, the server has to compile the code on the fly, which requires computing resources every time.

"Swift takes that away because everything is done up front," said Stephens. "That means less hardware, less memory, more safety, more scalability." For a company that has a PHP backend, Swift can potentially save tens or hundreds of thousands of dollars in hardware costs, he said.

While Stephens acknowledged that Google might push its open-source Go programming language for Android, he believes the company will eventually support a Swift compiler for Android.

"The key is going to be saving money," said Stephens. "There's a whole bunch of places where Swift will save enterprises a lot of cash."

There's also the issue of talent. Stephens said Apple's effort to encourage Swift education will pay dividends in the long run. Swift conferences, he said, are full of young, passionate developers, the sort of tech talent companies want. "I think that ultimately will drive enterprise usage more than anything."

[Editor's note: This article has been updated to remove a reference to an August 2015 GitHub post showing programming language popularity over time on the site. We noted the absence of Swift. In fact, Swift was not included because it was not made open source until four months later.]

Thomas Claburn has been writing about business and technology since 1996, for publications such as New Architect, PC Computing, InformationWeek, Salon, Wired, and Ziff Davis Smart Business. Before that, he worked in film and television, having earned a not particularly useful ... View Full Bio
We welcome your comments on this topic on our social media channels, or [contact us directly] with questions about the site.
Comment  |
Email This  |
Print  |
RSS
More Insights
Webcasts
Monitoring the Invisible - Digital Experiences in a Zero Trust World
Leveraging Infrastructure as Code to Streamline Security & Operations
More Webcasts
White Papers
Integration Platform as a Service for Order Management Systems: Why Should You Care?
Ransomware, the Exploding Cyber Threat
More White Papers
Reports
2021 Digital Transformation Report
Protection Strategies for a Cyber-Resilient Organization
More Reports