Both apps get new sharing powers that should making finding and connecting with people easier. For starters, there are new options for sharing BBM PIN barcodes across different social networks. Using barcodes lets another device scan the code to automatically generate and input the PIN code to their own BBM apps. This eliminates the need to enter the PIN code manually.

In addition to the new Share PIN option, BBM for Android and iOS makes it easier to find which social networking friends and contacts are also using BBM. The Tell Your Friends feature works via the browser, which requires users to navigate to the social network in question and login. Users can then browse their friends lists to see if there are BBM PIN codes listed in their friends' contact profiles.

[Can BlackBerry bounce back from catastrophic lows? See Android Wins 81% Of Smartphone Market .]

Improvements specific to the Android version of BBM revolve around the behavior of contacts and groups. Android device owners can now assign BBM contacts to categories, for example. This can help keep BBM contacts organized. Further, the BBM Group List has been improved with new sorting and filtering tools to make it easier to find specific groups and contacts. The Android BBM app also makes improvements to power usage and reduces battery drain.

Changes specific to the iOS version of BBM center on device support. BBM is now compatible with WiFi-only iPad tablets and iPod Touch media players that are running either iOS 6 or iOS 7. iPad and iPod Touch owners gain access to BBM and all the same features that are available to the iPhone version of the app. The messaging app also improves the performance of right-to-left language support and resolves an issue that hid BBM contact names from view. 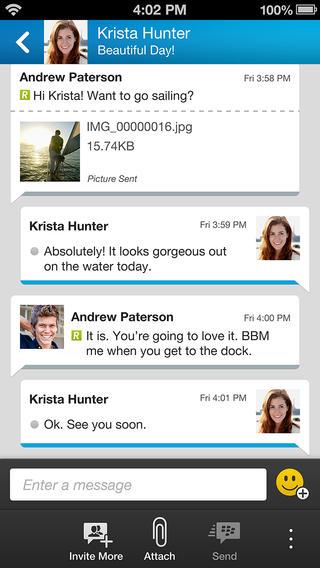 BBM launched late last month and saw solid uptake from Android and iOS device users. It scored more than 20 million downloads in the first two weeks. BBM has long been a core feature of BlackBerry devices. It allows users to message one another instantly while providing tools such as delivery confirmation and read receipts. The latest version for BlackBerry devices also includes voice calls, video chats, and screen sharing. Not all these features are available to Android and iOS devices, but will be soon.

BBM for Android devices can be downloaded from the Google Play Store, and from the Apple iTunes App Store.

Blackberry is, of course, in a fight to remain relevant. The idea that there were 20 million downloads of its BBM software in a single month  -- comparable to the adult population of Canada -- shows there is still strong interest in the brand.  Is it right to be offering software to the competing iOS and Droid worlds?  Yes. That's exactly what Microsoft did with Office to satisfy Mac fans, and it helped to assure that Office would be the dominant brand today. Maybe Blackberry can pull off an homage to that strategy.
Reply  |  Post Message  |  Messages List  |  Start a Board

Blackberry, i guess true name for enterprise solutions with email app that every traveling executive absolutely needed, email and great security were the hallmarks of the BlackBerry and no one else in the first decade even came closer to it, but now fact is enterprise smartphone is dead....even school going kid has a smartphone now...
Reply  |  Post Message  |  Messages List  |  Start a Board

I'm wondering how much this will help BB. Users of iOS and android are no doubt already using thier own IM apps. Maybe BB should make an IM app for the BB to message iOS and androids?
Reply  |  Post Message  |  Messages List  |  Start a Board

@aditshar... I have to agree with you on this. I think time has passed BB by. One never knows though. I just don't see how a IM app can save a company. They need to do so much more than making BBM available for iOS and Droid.
Reply  |  Post Message  |  Messages List  |  Start a Board

All of valid comments below, i dont think BB can overcome the situation now, until they introduce something innovatove, there are number of applications available for free on ios/windows/android store, ios and android has taken over nerve of end user through there variety of applications which is helping them to manage to personal and official work work at same time.
Reply  |  Post Message  |  Messages List  |  Start a Board

Quite seriously, if Apple would release iMessage for Android and PC, BBM would be dead in the water. The only things going for it that I can see are the reputation for solid messaging by BB, and the cross-platform availability now. Thing is, I can't see myself installing BBM on my iPhone.

Since BBM is a free app, I'm not clear how BB plans to monetize it in such a way that it could save the company. Bottom line from where I'm standing is that BB screwed themselves on the hardware front with a string of bad decisions (with hindsight, of course), and since that's most of their income, they're in deep trouble and I don't know if they're recover. And if they go under, then what for BBM anyway?
Reply  |  Post Message  |  Messages List  |  Start a Board

This is interesting news. Sometimes back Blackberry had the feature of Google maps which was taken out recently.
Reply  |  Post Message  |  Messages List  |  Start a Board

@jgherbert, You are right, but i guess moved a long distance from messages and calls ...people seek out for collaborative applications which can merge their social life into one box, rather than end user visiting FB, twitter and linkedin indivisually.
Reply  |  Post Message  |  Messages List  |  Start a Board
Page 1 / 2   >   >>
Editors' Choice
Hot Topics