The future of computing, as described by Facebook CEO Mark Zuckerberg at his company's F8 developer conference, looks a lot like its past.

"In the beginning... was the command line," as author Neal Stephenson wrote in 1999. By then, the graphic user interface had already overshadowed the text-based command line as a more usable and approachable method of interaction. The command line never went away, but retreated behind layers of abstraction.

In 2016, the command line has returned as a way to interact with chatbots, because phone calls have become too much of a burden and people can only deal with a limited number of apps.

"I've never met anyone who likes calling a business, and no one wants to install an app for every business," said Zuckerberg.

Zuckerberg's answer to voice jail and app overload is the Messenger Platform, which allows developers to build bots for Facebook's Messenger app.

Bots are programs that respond to text messages with replies and, potentially, actions, such as ordering products.

"To order from 1-800-Flowers, you never have to call 1-800-Flowers again," Zuckerberg declared, clearly pleased with the irony. 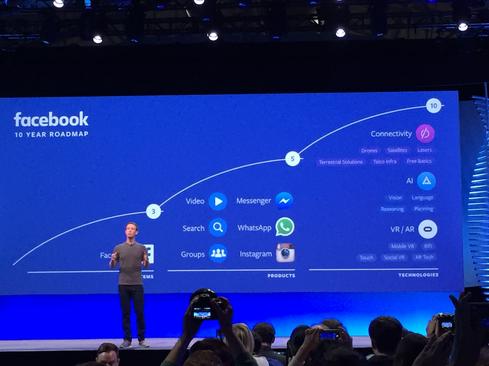 Businesses see promise in this scenario because Facebook Messenger, with 900 million monthly active users, has an audience that's isn't that far from the 1.6 billion people who use Facebook every month. That's why Salesforce, seeing in Messenger another channel for customer engagement and business opportunities, on Tuesday launched Salesforce for Messenger.

And with the aid of Facebook technology, like Wit.ai natural language recognition and machine learning APIs, Messenger bots hold the possibility of social and commercial interaction that can be accelerated via automation. Bots can provide data-driven content like weather updates or shipping notifications, but they can also be trained to engage in live conversation in order to obtain the information necessary to complete a transaction.

Among the figures cited by Zuckerberg, one stood out: The number of developers using Facebook technology grew 40% over the past year.

The figure might be more impressive if framed as a specific number rather than the vague "hundreds of thousands," as a Facebook spokesperson put it. But it's still noteworthy in light of Facebook's decision earlier this year to close Parse, its backend-as-service offering, despite its promise to focus on platform stability. Facebook handled the shutdown well by open sourcing Parse. Even so, developers tend to resent sudden changes that require them to rewrite their apps.

While no mention was made of Parse during the keynote, a Facebook survey sent to F8 attendees demonstrated concern about potential fallout. It solicited opinions about the extent to which Facebook "Cares about its developers" and "Offers a stable and reliable platform."

Zuckerberg distilled Facebook's roadmap for the next 10 years into a familiar line: "Give everyone the power to share anything with anyone."

To realize a vision that in many countries is politically unacceptable, Facebook is betting on social networking and its apps -- Messenger, WhatsApp, and Instagram -- in the near term and, in the years to come, on artificial intelligence, connectivity, and virtual/augmented reality.

And the company is backing its bets with services.

Facebook introduced a Live API, which allows developers to create apps that share live video. Zuckerberg observed that some public figures are getting larger audiences through live video than they do for their TV shows.

Developers can also take advantage of Quote Sharing, a tool for sharing excerpted content, Save Button, for saving content so it can be accessed later, and Profile Expression Kit, which allows video to be added to Facebook profiles.

Finally, as a way to encourage VR and panoramic content creation, Facebook said it will release plans for its Facebook Surround 360 camera as open source this summer.

Zuckerberg's evangelism of sharing took a political turn during his keynote, with allusions to the divisive rhetoric that has characterized this year's US presidential election. "The Internet has enabled all of us to access and share more ideas than ever before," he said. "Now as I look around and I travel around the world, I'm starting to see people and nations turning inward, against this idea of a connected world and a global community. I hear fearful voices calling for building walls and distancing people they label as 'others,' for blocking free expression, for slowing immigration... even cutting access to the Internet."

It sounded as if Zuckerberg were running for office, though he already presides over a community larger than any nation on Earth. "I hope that we have the courage to see that the path forward is to bring people together, not push people apart," he said.

And following a time-tested script for political support, Zuckerberg announced that every F8 attendee will receive a free Samsung Gear VR headset along with a customized Samsung Galaxy smartphone. There was much applause.

Perhaps in a few years, Facebook will introduce a Vote button.

Thomas Claburn has been writing about business and technology since 1996, for publications such as New Architect, PC Computing, InformationWeek, Salon, Wired, and Ziff Davis Smart Business. Before that, he worked in film and television, having earned a not particularly useful ... View Full Bio
We welcome your comments on this topic on our social media channels, or [contact us directly] with questions about the site.
Comment  |
Email This  |
Print  |
RSS
More Insights
Webcasts
Making XDR Work in Your Enterprise - May 12
Data Center Network Operations (NetOps) Reimagined
More Webcasts
White Papers
New Cybersecurity Paradigm
World Wide Technology: Digital Transformation Customer Journey
More White Papers
Reports
Intelligent Outcomes Are Key to Business Resilience
The State of CCPA 2021
More Reports