Great news for travelers: Hotels and other businesses cannot interfere with your personal WiFi hotspot.

If you're a business traveler looking to use your own WiFi hotspot on the road, the FCC has made your life a whole lot easier. If you're an IT or security executive at a commercial establishment looking to protect your guests, your life is now a lot more complicated.

The Federal Communications Commission made it clear that blocking people's WiFi hotspots will not be tolerated. "Willful or malicious interference with WiFi hotspots is illegal," the agency stated in an enforcement advisory on Tuesday, noting that doing so violated Section 333 of the Communications Act.

To date, this trend consists of one recent public case involving Marriott International. In an email to InformationWeek, an FCC spokesperson declined to discuss the number of WiFi blocking complaints the agency has received or the number of such cases, if any, the agency is investigating.

In October 2014, Marriott International agreed to pay $600,000 to settle an FCC complaint that it jammed guests' mobile WiFi hotspots at its Gaylord Opryland hotel and conference facility in Nashville, Tenn.

Initially, Marriott argued that it did so to protect guests "from rogue wireless hotspots that can cause degraded service, insidious cyber-attacks and identity theft," noting that it employed common FCC-authorized equipment to do so. 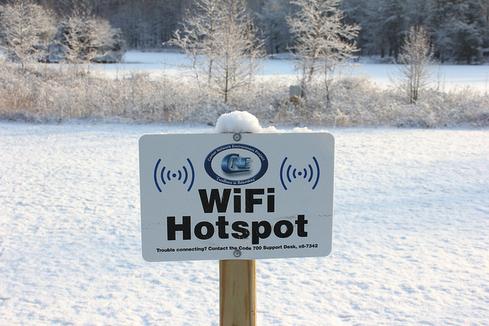 After widespread outcry over the company's actions, Marriott stopped insisting that WiFi blocking is lawful. "Marriott International listens to its customers, and we will not block guests from using their personal WiFi devices at any of our managed hotels," the company said in a statement in mid-January. At the same time, the company added that it wants clarification from the FCC about allowable network security measures. (In its October 2014 consent decree with the FCC, Marriott conceded that personal WiFi usage didn't represent a security threat.)

Wireless network management systems from vendors such as Cisco often include options like the ability to send deauthentication ("deauth") packets to boot unauthorized users from a network, including a rogue network operated by someone else.

An FCC spokesperson said in an email that Section 333 of the Communications Act applies "to willful or malicious interference with WiFi hotspots" and that the statutory term "interfere with" includes de-authentication as well as the electromagnetic interference emitted from a jamming device.

The term doesn't include unintentional interference, so deauthentication done for the purpose of load balancing appears to be acceptable. Nor does it include use of de-authentication on one's own network.

Thomas Claburn has been writing about business and technology since 1996, for publications such as New Architect, PC Computing, InformationWeek, Salon, Wired, and Ziff Davis Smart Business. Before that, he worked in film and television, having earned a not particularly useful ... View Full Bio
We welcome your comments on this topic on our social media channels, or [contact us directly] with questions about the site.
Comment  |
Email This  |
Print  |
RSS
More Insights
Webcasts
Zero Trust for a Work-From Home World
Nip Ransomware in the FUD: Detecting Attacks Pre-Encryption
More Webcasts
White Papers
Why Add Security to Your Skill Set and How to Do It
Improving Security by Moving Beyond VPN
More White Papers
Reports
The Infoblox Q4 2020 Cyberthreat Intelligence Report
The State of Threat Detection and Response
More Reports

@Curt Franklin As one licensed Ham/Amateur Radio operator to another that you would agree with the FCC.

@Charlie Babcock If they are passively listening then the FCC has no issue with them. If on the other hand they are doing a MitM operation then that could fall under the malicious interference issue. Since they would also be interfacing with the network then a death packet could be used to remove them from the network.

@Curt Franklin As for people learning to protect themselves they are still under the illusion that computers are appliances and need no maintenance "They just work." Though that is a topic for another time.
Reply  |  Post Message  |  Messages List  |  Start a Board

Doesn't that seem like a conflict of intereset. But then again, who better than someone in the communications industry to be the chair?
Reply  |  Post Message  |  Messages List  |  Start a Board

@Charlie, your question echoes one I've heard several network security specialists ask. They point out that "man in the middle" attacks are quite possible in public WiFi areas and that the venues (like hotels and conference centers) should be able to shut down all unauthorized hotspots in order to protect their legitimate users from such attacks.

I agree that MitM attacks are real, but I still think that intentional interference is the wrong response. Users need to learn to protect themselves -- and protection against MitM attacks should be part of the road-warriors toolkit.
Reply  |  Post Message  |  Messages List  |  Start a Board

@ProfTheory, anything remotely like "intentional interference" isn't allowed in the US. The FCC's decision seems to be a clarification that this interference can be at essentially any network layer and still be considered unlawful. I tend to agree with the FCC's decision here -- though I'm going to comment to a note by Charlie Babcock in just a moment and talk about "the rest of the story."
Reply  |  Post Message  |  Messages List  |  Start a Board

How do you distinguish the WiFi hotspot user from the WiFi snooper, who wants to capture your log in name and password and email contacts as you stay in a hotel, either here or abroad?
Reply  |  Post Message  |  Messages List  |  Start a Board

None of the wifi jammers -particularly the internet service providers- will be too worked up about the latest hot hair coming from the FCC.  This is the same agency whose chair is owned/operated/controlled by Comcast.  And what Comcast wants, Comcast gets as evidenced by the net neutrality issue.
Reply  |  Post Message  |  Messages List  |  Start a Board

"so deauthentication done for the purpose of load balancing appears to be acceptable."

Actually it isn't since the death would be intentionally sent to a station not assigned to their network. Since these are part 15 devices they must accept any and all interference meaning you can't get rid of them just because they are having an impact on your network performance. Just ask Curtis Franklin KG4GWA.
Reply  |  Post Message  |  Messages List  |  Start a Board
Editors' Choice
Hot Topics