"Today I'm announcing my departure from Google after almost 8 years," said Gundotra in a post on Google+, the service he has been managing. "I have been incredibly fortunate to work with the amazing people of Google. I don't believe there is a more talented and passionate collection of people anywhere else."

Gundotra joined Google in 2007 after a decade and a half with Microsoft, which he left as general manager of platform evangelism.

At Google, Gundotra initially evangelized the web and has been a frequent keynote speaker at company events. In 2009, when he was VP of engineering and head of developer evangelism, he declared at Google I/O: "The web has won." This was back when the web was mostly viewed through desktop browsers.

Since then, the situation has changed. In January, for the first time, more Americans used mobile devices than personal computers to access the Internet. Apps generated 47% of Internet traffic while mobile browsers accounted for 8%, according to comScore. PC-based browsing came to 45%.

The web remains a powerful, open platform, but it isn't receiving the same attention these days as native mobile apps, where platform owners can exercise greater control and demand fees. Neither Amazon, Apple, Google, nor Microsoft get a cut from Web-based commerce outside their stores. 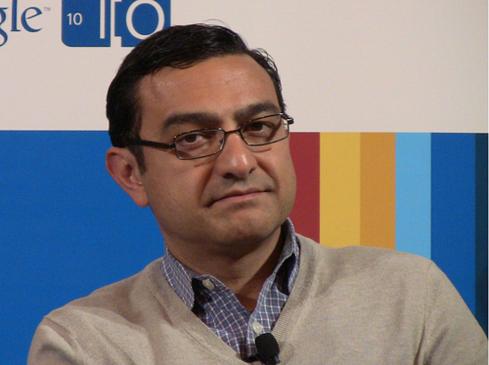 Gundotra hasn't exactly been marginalized by this shift, but social was a defensive move for the company, and now the wall has been built. Google's focus has narrowed to advertising and commerce under Sridhar Ramaswamy, Android and Chrome under Sundar Pichai, and its Cloud Platform under Urs Holzle, alongside the company's more speculative and research-oriented initiatives. Google+ is healthy enough, with more than 500 million monthly active users, but it has not yet evolved into an important development platform and user acquisition channel along the lines of Facebook. That might be because the Google+ APIs haven't yet presented a clear value proposition to enough developers.

Gundotra has had his share of failures, something of a badge of honor at Google. For example, he backed the ill-fated Google Wave in 2009, praising it with the Jobsian adjective "magical," rather than keeping it in the laboratory until it was ready. Nonetheless, his many accomplishments are well regarded, and he departs with CEO Larry Page singing his praises.

"You cut your teeth on our mobile apps and developer relations, turning our disparate efforts into something great," said Page in a comment on Gundotra's post, praising him for making developers excited to work with Google technology. "Then you built Google+ from nothing. There are few people with the courage and ability to start something like that and I am very grateful for all your hard work and passion."

Google declined to comment on a possible successor to helm Google+, but re/code reports that VP of engineering David Besbris will get the job, rather than Bradley Horowitz, VP of product management for Google+.

Thomas Claburn has been writing about business and technology since 1996, for publications such as New Architect, PC Computing, InformationWeek, Salon, Wired, and Ziff Davis Smart Business. Before that, he worked in film and television, having earned a not particularly useful ... View Full Bio
We welcome your comments on this topic on our social media channels, or [contact us directly] with questions about the site.
Comment  |
Email This  |
Print  |
RSS
More Insights
Webcasts
Securing and Monitoring Networks in the 'New Normal'
Protecting Your Enterprise's Intellectual Property
More Webcasts
White Papers
A Technical Deep Dive on Software Exploits
Zero Trust Evaluation Guide
More White Papers
Reports
2020: Threats in Review
2020 State of Cybersecurity Operations and Incident Response
More Reports

It's been fascinating watching Ingress players shift from in-game chat to Google+ and then move to Hangouts. Like Facebook, it's not easy in Google+ to know and limit who can view your information.
Reply  |  Post Message  |  Messages List  |  Start a Board

He didn't announce any plans. I expect he could go pretty much anywhere. If I were in his shoes, I'd be looking to land at Amazon.
Reply  |  Post Message  |  Messages List  |  Start a Board

Larry Page said Gundotra built Google+ from nothing? It's still nothing.
Reply  |  Post Message  |  Messages List  |  Start a Board

I take it he gave no indication of where he is going next? Certainly a highly competent leader many organizations might covet ... or will he start something new?
Reply  |  Post Message  |  Messages List  |  Start a Board
Editors' Choice
Hot Topics