Google has revealed the name of its newest mobile operating system. The upcoming Android N will be called Nougat, the company announced June 30. The new version is expected to roll out sometime this summer.

For the past several years, Google has adhered to the pattern of naming its Android operating systems after sugary treats. The names have also progressed in alphabetical order, a tradition the company is continuing with the Nougat moniker.

However, Google deviated from its usual habits in the process of naming Android N. Instead of choosing internally, it decided to let users have a say. The company launched a website to crowdsource nickname suggestions.

The codename for Android N was New York Cheesecake, reported VentureBeat, so that was out of the running for the final selection. According to a Google Opinion Rewards Survey conducted in March, other potential name selections included Napoleon, Nut brittle, Noodles, Nachos, Nori, and Neapolitan ice cream.

Some suspected Google might go with Nutella as part of a brand partnership, as it did with Android 4.4 KitKat, which launched in October 2013. Aside from KitKat, the rest of Android's nicknames -- such as Cupcake, Gingerbread, Jelly Bean, and Lollipop -- have been generic.

It seems Google opted to sidestep the trademarking difficulties with Nougat.

Google released the developer preview for Android N earlier than anticipated on March 9, 2016. It had traditionally released the test version of its mobile OS at the Google I/O developer conference.

Some of the new features arriving in Nougat include the Vulkan 3D rendering API, which will give developers more control over the phone's processor. It promises to improve 3D graphics. It will also bring split-screen multitasking and picture-in-picture to Android smartphones and tablets.

On the security front, Android N will be able to automatically download system updates in the background to boost protection across the platform. Some messaging features will also get end-to-end protection and file-level encryption.

Android Instant Apps are another interesting feature coming to mobile. These will allow people to view certain content, even if doing so requires an app they don't currently have. If they need to watch a YouTube video and don't have YouTube, for example, Instant Apps will temporarily install the components needed. 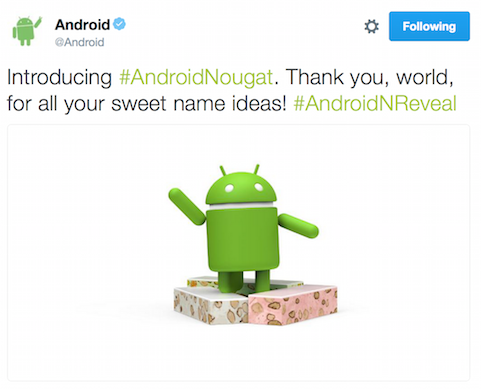 Nougat will also give a foundation to Google's new virtual reality platform Daydream. With this platform, developers will have a set of rules for creating virtual reality apps that will be able to work on a range of devices.

Over the course of its testing period, Google has launched four developer previews of Android N. As part of the fourth version, developers were given the option to begin sending their revised apps to the Google Play store.

News of the Android Nougat nickname did not come with a version number or official release date for the new mobile OS. Industry watchers predict this will be version 7.0.

Nougat will be the successor to Android 6.0 Marshmallow, which was released in fall 2015. Marshmallow hit 10.1% adoption on Android devices earlier in June, after eight months on the market.

Kelly Sheridan is the Staff Editor at Dark Reading, where she focuses on cybersecurity news and analysis. She is a business technology journalist who previously reported for InformationWeek, where she covered Microsoft, and Insurance & Technology, where she covered financial ... View Full Bio
We welcome your comments on this topic on our social media channels, or [contact us directly] with questions about the site.
Comment  |
Email This  |
Print  |
RSS
More Insights
Webcasts
Protecting Your Enterprise's Intellectual Property
How Elite Analyst Teams are Transforming Security with Cyber Reconnaissance
More Webcasts
White Papers
Two-Factor Evaluation Guide
From MFA to Zero Trust
More White Papers
Reports
2021 Top Enterprise IT Trends
Annual Global State of the WAN
More Reports

I am officially not shocked about the naming. It was the most obvious choice, obviously.
Reply  |  Post Message  |  Messages List  |  Start a Board
Editors' Choice
Hot Topics