Google for Work customers now have an extra layer of protection against the distribution of sensitive content over Gmail.

Gmail for years has offered ways to save people from themselves. Mail Goggles, for example, asks Gmail users to solve simple math problems before sending messages, to help catch inappropriate or ill-considered sentiment. Undo Send offers a chance to recall messages sent in haste. But such whimsical safety nets don't really address the needs of business customers.

Now enterprise users of Gmail have their own mechanism for limiting the distribution of sensitive content. On Wednesday Google added Data Loss Prevention to Gmail for those using Google for Work.

Data Loss Prevention is designed to identify content in email -- in the message or in an attachment -- that violates corporate policy and to take whatever action has been specified by the administrator. Actions may range from quarantining the message for review, directing the sender to modify the message, or blocking the message and notifying to the sender. 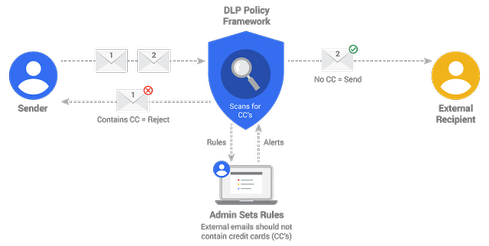 "Organizations may have a policy that the Sales department should not share customer credit card information with vendors," explains Suzanne Frey, director of security, trust, and privacy for Google Apps, in a blog post. "And to keep information safe, admins can easily set up a DLP policy by selecting 'Credit Card Numbers' from a library of predefined content detectors."

DLP has been a long time coming. In 2007, Google's Postini group offered a limited form of DLP called "logical expressions" for Gmail business customers. But it didn't meet the needs of many organizations. In 2012, Google began encouraging Postini customers to migrate to Google Apps for Work, based on the understanding that business customers could expect feature parity. But to use effective DLP, customers had to look to other providers.

Cloud security has become critical for customer trust since the 2013 Edward Snowden disclosures sowed doubt about the safety of data held by cloud companies. Other security-related improvements implemented by Google this year include the addition of SAML and OIDC support to Google Apps Identity Services in October; the expansion of mobile device and mobile app management tools in September; the ability to add customer-supplied encryption keys to Google Compute Engine; and the launch of Android for Work.

Thomas Claburn has been writing about business and technology since 1996, for publications such as New Architect, PC Computing, InformationWeek, Salon, Wired, and Ziff Davis Smart Business. Before that, he worked in film and television, having earned a not particularly useful ... View Full Bio
We welcome your comments on this topic on our social media channels, or [contact us directly] with questions about the site.
Comment  |
Email This  |
Print  |
RSS
More Insights
Webcasts
People Are The Most Important Part of Autonomous SOC
Cybersecurity's Next Wave: What You Should Know
More Webcasts
White Papers
Why Add Security to Your Skill Set and How to Do It
451 Cloud Confidence Report
More White Papers
Reports
The State of Cloud Computing - Fall 2020
Special Report: Edge Computing: An IT Platform for the New Enterprise
More Reports

That is both very cool and little creepy. Kind of like Google is reading your sensitive mail, even though no one will ever  set their eyes on it. that could really help slow down phishing attacks and general 'oops, I didn't know that file had secure info in it' type of mistakes. Since users are still the most likely way attackers get sensitive information this is one way  to mitigate that.
Reply  |  Post Message  |  Messages List  |  Start a Board
Editors' Choice
Hot Topics

11 Ways DevOps Is Evolving Lisa Morgan, Freelance Writer,  2/18/2021
White Papers
Why Add Security to Your Skill Set and How to Do It
How Secure Are Your Endpoints?
Definitive Guide to Endpoint Privilege Management
Data Orchestration: Critical Elements for Data Strategy and Infrastructure
New Cybersecurity Paradigm