Google Glass faces a problem: Too many people still see it as a threat. Despite Google's ongoing efforts to promote Glass as a fashionable tool with practical uses, Glass recently made headlines as a suspected piracy tool: A man wearing Glass in a movie theater in Columbus, Ohio, on Monday was questioned by Homeland Security agents because of misplaced suspicion that he might have been recording the movie.

Such incidents can be expected to become less frequent as Glass becomes more commonplace and people understand that the device isn't necessarily recording all the time. But before it achieves ubiquity, Glass will require a killer app or two, something that makes it compelling rather than merely intriguing.

Glass might find its killer app in games. Interest in computer games played a major role in the development of personal computers -- the desire to play computationally intense games figured into consumers' willingness to purchase new, more powerful PCs -- and it might well become a driving force in the popularization of wearable devices.

To help that happen, Google on Friday published five Glassware mini-games to demonstrate how Glass can be used as an entertainment device.

[Is somebody watching you? Read Google Glass And Surveillance Etiquette.]

Tennis, as its name suggests, offers a simple tennis simulation. It relies on the Glass accelerometer and gyroscope to track the player's head position for assessing side-to-side movement. The Balance game displays virtual blocks to be balanced atop what looks like the Android logo's head. Clay Shooter is a basic skeet-shooting simulation, built with accelerometer data and simulated physics. Matcher is a shape-matching game that's linked to the player's head movements. And Shape Splitter borrows the interactive dynamic of Fruit Ninja, presenting moving shapes that the player can slash with a hand gesture.

If Google is serious about gaming, however, it might want to consider some way to expand the Glass display area to more fully cover the wearer's field of view, along the lines of the Oculus Rift headset. Having game play confined to a small portion of what's visible could limit player enthusiasm, even if it might be appropriate for some situations and casual games. 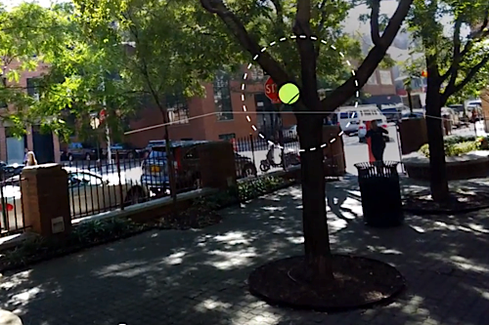 His company's Glassware app, LynxFit, and the recently introduced LynxCast, which links LynxFit on Glass to a Chromecast-connected TV, attempts to combine gaming with fitness.

"So now, armed with the sensors in your Google Glass device, we deliver interactive gamified fitness content on the big screen TV for you to enjoy by yourself or to challenge your friends," said Ackerson. "Imagine playing Super Mario Brothers from Mario's perspective, by using the motion tracking functionality in Glass. We want to deliver an experience where you go through a 30-day fitness program, while you jump, dodge, duck, and high-knee run in place in your living room, out in the park, or during your work break in your hotel room."

Google just shipped updated Glass headsets to members of its developer-oriented Glass Explorer program. The company is expected to launch a mass-market version of Glass later this year.

Cost is probably its biggest obstacle, but I can see dedicated gamers investing in it if games do take off.
Reply  |  Post Message  |  Messages List  |  Start a Board
InformationWeek Is Getting an Upgrade!