The move that will eventually make the more than a million Android apps available to Chrome OS users has been long expected.

"Later this year you can expand your app's reach to a new hardware platform and wider audience while maximizing the Google Play ecosystem," explained Google software engineers Dylan Reid and Elijah Taylor in a blog post. "With expanded app availability, new use cases and improved workflows can be achieved for all Chromebook users, whether for personal use, for work or for education."

The move, which will eventually make the more than a million Android apps available to Chrome OS users, has been long expected.

Technology that allowed this was announced at Google I/O 2014 and debuted for a handful of Android apps later that year. So Google's plans, which were inadvertently disclosed on the Google I/O 2016 website Wednesday, weren't surprising. But the means by which Chrome OS is accommodating Android apps are unexpected.

Rather than using Android Runtime for Chrome (ARC) under the hood, Google reworked its compatibility code to essentially put Android into a container. As a result, Android developers don't have to do much work, if any, to make their apps work on Chromebooks.

The relationship between the two operating systems has been perplexing, because Google itself has changed course as Android has grown, and because mobile Web apps have failed to keep up with native apps. In 2010, Google introduced packaged Web apps, which were designed to behave more like traditional apps by running outside the browser. In 2013, Google shifted to a different technological approach to run Chrome apps on other platforms. 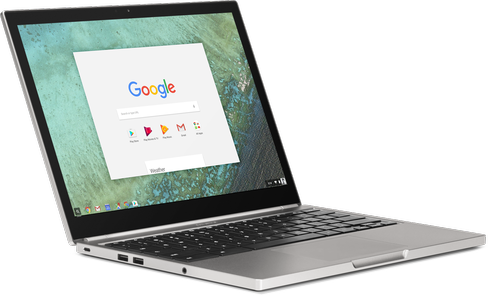 But the popularity of Android and native apps in general has changed the way Google appears to see things. In 2009, Google was convinced "the Web has won." Over the past few years, as Android's popularity has surged and brought revenue through Google Play, Google has shifted resources toward Android. The launch of its Android-based Pixel C tablet last year raised doubts about the future of Chrome OS devices.

At Google I/O on Wednesday, in a discussion following a panel on the company's enterprise business, Google product management director Rajen Sheth reiterated Google's intention to support Chrome OS, and framed the growing closeness between the two operating systems as a consequence of increasingly shared code. He pointed to seamless updating in Android N, and said that code came from Chrome OS. In effect, Android and Chrome OS are becoming more like OS X and iOS, joined at the hip but not identical or interchangeable.

[See how Android N Focuses on Performance, Productivity, and Security.]

Chrome OS and Chromebooks aren't likely to disappear anytime soon. As Google's blog post notes, Chromebook shipments overtook Macs in the US during Q1 2016, based in IDC figures, and Chrome OS has become the second most popular PC operating system in the US. Chrome OS offers security and manageability advantages that assure its relevance in the education and business computing markets, if not more broadly.

At the same time, evolving technology guarantees that nothing is settled. At Google I/O 2016 on Wednesday, Google introduced Android Instant Apps, a way to use Android apps that have not previously been installed on an Android device. If this approach proves popular, it could transform the way people think about, manage, and buy apps by making search rather than app stores the primary app distribution mechanism.

Thomas Claburn has been writing about business and technology since 1996, for publications such as New Architect, PC Computing, InformationWeek, Salon, Wired, and Ziff Davis Smart Business. Before that, he worked in film and television, having earned a not particularly useful ... View Full Bio
We welcome your comments on this topic on our social media channels, or [contact us directly] with questions about the site.
Comment  |
Email This  |
Print  |
RSS
More Insights
Webcasts
People Are The Most Important Part of Autonomous SOC
Nip Ransomware in the FUD: Detecting Attacks Pre-Encryption
More Webcasts
White Papers
How to Build Your Incident Response Plan
Tech Insights: Detecting and Preventing Insider Data Leaks
More White Papers
Reports
The State of DevSecOps Report
DNS Network Traffic Volumes During the 2020 Pandemic
More Reports

There have been rumors of an Android/Chromebook app connection for years. I'm really impressed with the decision to put apps in containers to run on Chromebooks. The app ecosystem is evolving!
Reply  |  Post Message  |  Messages List  |  Start a Board
Editors' Choice
Hot Topics