The dispute raises an important question for individuals and businesses: Who controls the software on mobile devices?

Google's antitrust troubles in Europe have been compounded by the addition of another complaint against the company.

Disconnect, maker of a privacy app with the same name for Android, iOS, OS X, and Windows, has complained to European regulators that Google has abused its dominant market position in a way that violates EU competition rules.

Google removed Disconnect Mobile from the Google Play store for violating its policy against apps that interfere with other apps. To protect user privacy, Disconnect blocks "unsolicited network connections" between a mobile user's app or browser and services involved in tracking or malvertising. 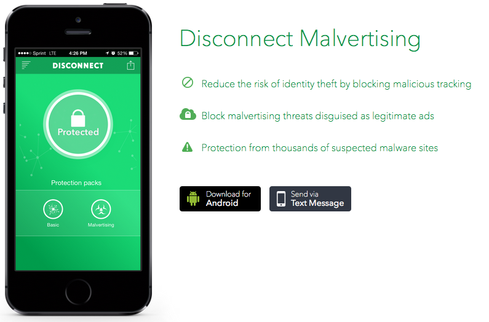 The dispute raises important questions for individuals and businesses: Who controls the software on mobile devices? And can software companies survive if they're excluded from the dominant mobile distribution channels such as Google Play, Apple iTunes, and Windows Phone Store?

Google did not immediately respond to a request for comment.

Disconnect's complaint contends that Google removed its app "because it blocks third party and other mobile applications from serving ads that Google and others sell." It also claims that Google has not removed competing apps that do not block tracking in other apps. Disconnect's Android app can still be downloaded directly from the company's website and installed manually.

Disconnect cofounder and CEO Casey Oppenheim said in a statement that his company doesn't oppose advertising and recognizes that ad revenue supports many Internet companies. "But users have the right to protect themselves from invisible tracking and malware, both of which put sensitive personal information at risk," said Oppenheim. "Advertising doesn't have to violate user privacy and security."

Whether or not users have the right to protect themselves from unwanted ads or malware -- a German court recently ruled ad blocking is legal -- they may not realize they have the ability to do so if privacy apps aren't visible in Google Play. Though Android users have the option to install apps from sources other than Google Play, Disconnect's complaint asserts that the loss of revenue experienced after its app was removed from Google's online store demonstrates that Google "has foreclosed them from the market."

Disconnect is not the only company to run afoul of Google for blocking ads. In 2013, Google banned AdBlock Plus from Google Play for violating its app interference policy. The Electronic Frontier Foundation condemned the move at the time. "Making it hard to install useful software will have the concrete effect of greatly reducing how many people actually succeed when they try to do so," the cyber liberties group said. "This is the kind of manipulative attack against openness that we've learned to expect from Apple, but we're extremely distressed to see it from Google."

Adblock Plus appears to have found a way around Google's ban. It released its own Android browser -- available on Google Play only to beta testers until its official release -- with ad-blocking technology built in. While the software no longer affects the communication of third-party apps, it does provide its privacy and security protection to those viewing websites on Android devices.

Asked why Google so far has allowed the Adblock Browser for Android in Google Play, Ben Williams, communications manager at Eyeo GmbH, said in an email, "Why Google apparently treats browsers differently only they know -- in the Play store they are judge, jury, and executioner. But if you have a look at the Developer Distribution Agreement that was cited as the reason for removing Adblock Plus for Android, apps that operate across the entire operating system (like Adblock Plus for Android and many of the others you named) seem to be treated differently than fully contained apps like Adblock Browser or any other browser."

Thomas Claburn has been writing about business and technology since 1996, for publications such as New Architect, PC Computing, InformationWeek, Salon, Wired, and Ziff Davis Smart Business. Before that, he worked in film and television, having earned a not particularly useful ... View Full Bio
We welcome your comments on this topic on our social media channels, or [contact us directly] with questions about the site.
Comment  |
Email This  |
Print  |
RSS
More Insights
Webcasts
Fintech at SaaS speed: Navigating the scale & security challenge
Disaster Recovery/Business Continuity in the New Normal
More Webcasts
White Papers
AWS Lambda Security Best Practices
Cloud Security Blueprint: Architectures and Solutions
More White Papers
Reports
Intelligent Outcomes Are Key to Business Resilience
Dark Reading Report: Battle for the Endpoint
More Reports