The tech industry tends to overlook almost any excess if it results in innovation, because it's the foundation of empires. Tempermental founder, worker exploitation, environmental damage, selling tools to tyrants? But look at that shiny new thing!

Or so it may seem. Reed, however, put innovation in its place. Among his rules for product development, there's one that argues against innovation, at least as a destination.

Singer Kanye West, according to Reed, said in an interview, "Innovation gets almost too much credit in a way. There's no money in innovation. The money is in the repetition."

To anyone in the entertainment industry, this may be obvious. One only need look at Marvel's Avengers: Age of Ultron to recognize that business is about repetition. But the technology industry doesn't celebrate repetition in the same way -- standards and compatibility maybe, but not repetition. Changing the world doesn't fit with business as usual. 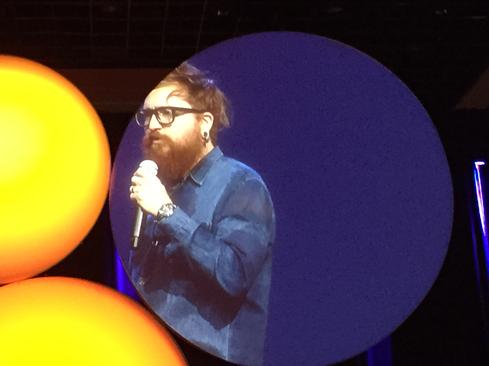 What matters, said Reed, is being able to repeat something over and over. "Test, repeat, weaponize," he said.

[Read what IT can learn from the Boston Red Sox.]

There's some truth to that, but innovation has to happen too. Apple wouldn't get to sell the iPhone 6 if it hadn't created the first iPhone.

There were other rules too: Give people what they want quickly; invest in user experience; don't be clever (but be straightforward); focus on the signal-to-noise ratio; and create opportunities for the user to be delighted.

Reed offered an anecdote about his experience working on the 2012 Obama campaign in a story that suggests some limits to the value of repetition.

Recounting how his email team would place bets on which email subject line would get the best response, Reed said no one ever got it right all the time. That's why it's important to use testing and iterative development to guide your brand, he said.

Reed observed that the President, being very presidential, did not say, "Hey." Yet when the campaign tested "Hey" in a fundraising email, it did well.

"It made so much money, suddenly, the President said 'Hey,'" Reed said.

Dare to repeat yourself, until you learn better. And that may look a lot like innovation.

Thomas Claburn has been writing about business and technology since 1996, for publications such as New Architect, PC Computing, InformationWeek, Salon, Wired, and Ziff Davis Smart Business. Before that, he worked in film and television, having earned a not particularly useful ... View Full Bio
We welcome your comments on this topic on our social media channels, or [contact us directly] with questions about the site.
Comment  |
Email This  |
Print  |
RSS
More Insights
Webcasts
What We Can Learn from Sports Analytics
Making Cybersecurity Work in Small and Medium-Sized Businesses
More Webcasts
White Papers
From MFA to Zero Trust
Presenting Your Cloud Security Strategy to the Board
More White Papers
Reports
The State of Threat Detection and Response
The State of Cloud Computing - Fall 2020
More Reports

@Thomas: That's very true.  Look at the Chromebook.  In the 90s, we called them NCs -- network computers.  They didn't take off.  It took Google to champion that particular innovation all these years later.
Reply  |  Post Message  |  Messages List  |  Start a Board

That's true. I think what Kanye West fails to acknowledge is the difference between incremental and radical innovation. Radical Innovation is where a company makes a big leap outside of the box to create a new market space, while incremental is where a company works within a pre-existing box. When he discredits innovation, he's really saying that radical gambles such as his most recent album (Yeezus) are often not worth the risk. This principle also applies to business; as you said, it is often incremental innovation (iphone, sliced bread etc.) which garners the most success compared to radical innovation (first mobile phone, first loaf of bread, etc.) However this does not mean that radical innovation should be ignored. Innovation Management platforms such as Qmarkets' can help organisations to generate continued process innovation, while at the same time opening up their ideation process to invite disruptive/radical innovation. There is always room for both approaches!
Reply  |  Post Message  |  Messages List  |  Start a Board

...not for its own sake, and certainly not because new ideas are necessarily better than old ones (most new ideas are bad), but because it's the only way to a better product.  And if you insist on trying to make money with the tried and true (even if only you know how to do it), eventually people catch up to you, forcing you to rely on cutthroat tactics and political connections to keep your profit margins up.

I can pretty much guarantee that there would be a lot less recycling of plots and stories in Hollywood if the copyright term was the 14 years it was in 1790.

Interesting thinking. What Obama's campaign was able to do in that election is think differently than the competition, which made them challenge the status quo and thus come out on top. It's amazing to me it took that long for campaigns to use a startup mentality, but look what happened and the subsequent success that it brought about.

I think a better way to frame his argument is that innovation opens new markets and repetition conquers those markets. Often the company that innovates isn't the one that maximizes the commercial success of the innovation.
Reply  |  Post Message  |  Messages List  |  Start a Board

Without innovation aren't we all just going to be repeating the smae thing over and over again? Innovation may not be the end all be all of product development, but without it would we have ever gotten to the PC, smart phones, or airplanes?

Without innovation aren't we all just going to be repeating the smae thing over and over again? Innovation may not be the end all be all of product development, but without it would we have ever gotten to the PC, smart phones, or airplanes?
Reply  |  Post Message  |  Messages List  |  Start a Board
Editors' Choice
Hot Topics