Apple's iPhone and iPad run undisclosed services that allow security features to be bypassed, according to a prominent computer security researcher.

Zdziarski in a blog post stresses that he is not accusing Apple of working with the NSA, but he voices suspicion that the NSA might have used some of these services to access data on iOS devices, as described in a recent Der Spiegel report.

[It's round two for an old type of virus you thought was dead. Read Retro Macro Viruses: They're Baaack.]

"I am not suggesting some grand conspiracy," Zdziarski explains. "There are, however, some services running in iOS that shouldn't be there, that were intentionally added by Apple as part of the firmware, and that bypass backup encryption while copying more of your personal data than ever should come off the phone for the average consumer."

Zdziarski says he hopes Apple will correct the issue because these services should not be present. He claims to have emailed both CEO Tim Cook and former CEO Steve Jobs about these "backdoors," some of which have existed for years, and to have received no response.

In a paper describing his findings, the services com.apple.pcapd and com.apple.mobile.file_relay are among the most questionable code routines that Zdziarski discusses. The former launches a silent packet sniffer that allows the the client to copy the network traffic and HTTP header data coming in and out of the device. The latter accepts a list of requested data sources, and delivers an archive of the data requested, bypassing Apple's built-in backup encryption system in the process. 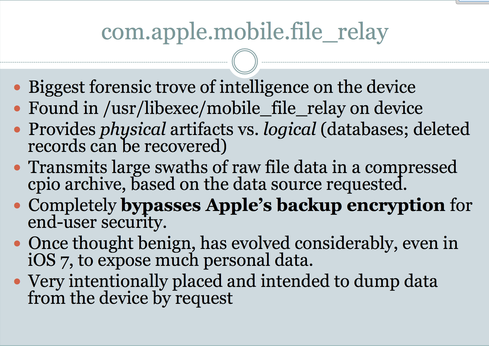 These services and related ones, which have been augmented over the years by Apple, appear to represent an effort to provide law enforcement agencies with easier access to device data. Yet it's accepted wisdom among computer security experts that backdoors are a bad idea because they're potentially exploitable by anyone -- investigators, intelligence agencies, or cyber criminals.

"When parties communicate using services with [lawful intercept] features, there is an increased likelihood that an unauthorized and/or malicious adversary with the right technical knowledge and access to the system could capture communications contents without detection," a Center for Democracy and Technology report noted last year.

Zdziarski questions why Apple allows a packet sniffer to run on some 600 million iOS devices, why there are undocumented services that bypass user backup encryption, and why most iOS user data is still not encrypted to protect it from Apple.

Thomas Claburn has been writing about business and technology since 1996, for publications such as New Architect, PC Computing, InformationWeek, Salon, Wired, and Ziff Davis Smart Business. Before that, he worked in film and television, having earned a not particularly useful ... View Full Bio
We welcome your comments on this topic on our social media channels, or [contact us directly] with questions about the site.
Comment  |
Email This  |
Print  |
RSS
More Insights
Webcasts
SASE: The Right Framework for Today's Distributed Enterprises
Managing a Hybrid Cloud Infrastructure
More Webcasts
White Papers
Annual Cybercrime Report
ITSM for the Enterprise - What Makes it Work?
More White Papers
Reports
We Need Your Input: Trends in Workforce Optimization
Immuta Data Engineering Survey: 2021 Impact Report
More Reports

Cars require a government-issued license to operate and there's some rationale for imposing a privacy cost if it means road safety can be improved and lives can be saved. Communication has become similarly regulated but there's less of a public safety rationale and more of a government burden to respect the constitutionally guaranteed right to free speech. As such, phones should not be compromised by default.
Reply  |  Post Message  |  Messages List  |  Start a Board

It's not acceptable, and if Microsoft or Google were the snooper in question, people would screaming a whole lot louder. Can't say I get the appeal of iThings, but you have to hand it to Apple. It's got some strong Kool-Aid.
Reply  |  Post Message  |  Messages List  |  Start a Board

People would be up in arms if they learned the home they bought or the car they bought carried surveillance technology that authorities could enable at their convenience. Yet somehow it's acceptable in electronic devices?