Pages, Keynote, and Numbers are now accessible to Windows users, even if they don't also have an Apple device.

Apple's iCloud service boasts a banner that says, "Now anyone can use Pages, Numbers, and Keynote for iCloud." But "anyone" does not include anyone using Android, despite reports to the contrary.

In mid-February, Apple made a beta version of its iWork for iCloud accessible to users of Windows hardware who didn't also have an Apple device and corresponding Apple ID. Now it has simplified the creation of an Apple ID through iCloud.com, so Windows users don't have to go through iTunes to obtain Apple credentials.

Apple's support website says that iCloud's apps can now be accessed from the Web without Apple hardware. "Don't have an iOS device or Mac?" Apple says in its support website. "You can still sign in to iCloud.com and use Pages, Numbers, and Keynote for iCloud to create beautiful documents, spreadsheets, and presentations, and collaborate with others in real time."

Yet this does not mean Apple has made its Web apps platform-agnostic, as Microsoft has done with Office and Google has done with Google Apps.

Attempts to access iCloud.com using Chrome 40 and Firefox 35 on an Android Nexus 7 tablet running Android 5.0.2 (Lollipop) produced the message, "Android browsers are not supported." This is consistent with Apple's iCloud compatibility requirements, which list only "a PC with Windows 7 or Windows 8" as the only non-Apple hardware options.

An Apple spokesperson confirmed to InformationWeek via email that the company's published iCloud system requirements are accurate, though he mentioned that in some circumstances Android users might be able to access iCloud apps, despite lack of official support. An Android user might be able to do so by spoofing an iCloud-compatible user-agent header in his or her browser. 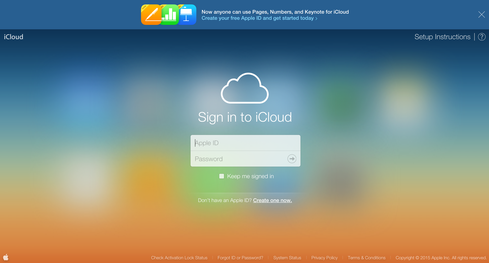 In any event Apple appears to be inching away from its strategy of linked hardware and software, a strategy that has been in place since company co-founder Steve Jobs stopped allowing hardware partners to make Mac-compatible clones in 1997.

Apple began looking beyond its OS X customers in 2003 when it launched iTunes for Windows. Its goal was to sell more iPods, and it did so in the years that followed. It introduced Boot Camp, to allow Macs to run Windows, in 2006. It then launched Safari for Windows in 2007, but stopped updating the software in 2012. Overall, Apple has tended to develop software that complements and adds value to its hardware while denying that value to competitors.

[ Wondering what Apple has planned next month? Read Apple's March 9 Event: Is It Time For The Apple Watch? ]

As Apple looks for growth, however, it may try to reach an audience beyond OS X and iOS customers. Apple's acquisition of Beats Music and Beats Electronics in 2014 gave the company versions of the Beats Music app for Android and Windows Phone, in addition to iOS. Apple SVP of Internet services, Eddy Cue, has said the company plans to continue offering the Beats Music app on different platforms.

That's a start, though it's far short of the extent to which Google and Microsoft make apps available on competing platforms and accept the Web as a non-proprietary platform. The Apple Watch, which gets its big reveal March 9 and is slated to be released to consumers in April, shows Apple pursuing its traditional strategy of integrated hardware and software. Customers will need an iPhone 5 or later to take advantage of the Apple Watch's features. But, for its Internet services in particular, it's difficult to see why Apple would choose to shut out potential customers who favor other platforms when the competition admits anyone.

Thomas Claburn has been writing about business and technology since 1996, for publications such as New Architect, PC Computing, InformationWeek, Salon, Wired, and Ziff Davis Smart Business. Before that, he worked in film and television, having earned a not particularly useful ... View Full Bio
We welcome your comments on this topic on our social media channels, or [contact us directly] with questions about the site.
Comment  |
Email This  |
Print  |
RSS
More Insights
Webcasts
Nip Ransomware in the FUD: Detecting Attacks Pre-Encryption
Cybersecurity's Next Wave: What You Should Know
More Webcasts
White Papers
Sunburst: Impact and Timeline
Understanding Credential Abuse Attacks: A Real-World Example
More White Papers
Reports
Intelligent Outcomes Are Key to Business Resilience
The State of DevSecOps Report
More Reports

I have a question... even though Apple has had it's market share become affected because of the competition, developers and companies still prefer iOS given that it's life cycle is both predictable (any given app will be able to run for a minimun of at least a year) and consistent, since even if there's a newer model, prior models are still kept compatible, the Iphone 4S being the best example.

In your opinion, what other platforms allow for companies to have a similar strategy?

I love android, but it's drawback is in the hardware, since every manufacturer both has there own version of it and the hardware is never the same, so the same app will either not run the way it was designed, or not run at all.

I do think that Windows is something of a game changer, since the apps will not only be able to run on phones, but also on PCs with Windows 10 in the horizon.

Thank you for your comment...and spot on.

I think the main trigger that caused Apple to have to shift it's R&D to focus on customer feedback is to due the intensity of the competition. At the beginning, Apple enjoyd being on its on Island...and it wasn't until the Samsung Galaxy that it started to see how the competition was giving customers the options that they really wanted.

Your also correct that high end phones aren't really necessary for doing business...I think this comes down to the need. If for receving and making conference calls and emails, yeah mostly any smartphone today will do. But there are some task that you do need a smartphone with a more robust processor (like when using the phone as part of a hardware interphase).

The very fact that Companies are listening to Consumers is a good thing.

Apple has no choice but to listen into consumer-input(because they are more customer-facing than most other Tech Firms and basically make Consumer Non-Discretionary products).

An iPhone is nice to have,but is it a necessity to do business?

I don't think so.I could use a simple 100 Dollar Android One phone and do basically all the same stuff that the iPhone accomplishes.

So basically if they stop listening to Consumer Input(did you notice how quickly they pulled the latest iOS release on older devices after they noticed it was crashing them all???).

I think that because today's market is being driven more by what the end user wants (versus it being driven by the companies), things are changing.

Apple's Ipad and Iphones are clear example of them showing more leniance towards changing based on user feedback (the bigger screen of the latest Iphone is a clear indicator).

Apple might not try to pursue challenging Microsoft's Office suite head on, but it is slowly making it's footprint in that space.
Reply  |  Post Message  |  Messages List  |  Start a Board

For anyone who supervises Enterprise IT ;EVERYTHING about Apple and the way they design Their Systems is Annoying.

Is it any wonder majority of Enterprise IT folks are against Apple and further Apple encroachment in the Enterprise?

Have to agree with your inputs as well as James here.

Android is losing Marketshare (only at the Higher end ) where Apple & even Windows are gaining enormous traction but at the Lower end its all Android today.

Android is going very strong at  Entry-Level Devices but even here Windows is trying very-very hard to break through with their Cut-price Lumia deals with Emerging Market Handset makers like Micromax,etc .

We have a very interesting time up ahead for sure in the Mobile OS battlefield!
Reply  |  Post Message  |  Messages List  |  Start a Board

You are way more optimistic than I would ever be here...

You have raised a very good point here-And for that one has to give credit where its due to Microsoft.

Microsoft very early in the day saw the writing on the wall-Its Interoperability and has moved very quickly to ensure that their Best Seller Software Solutions work on any OS and very easily.

Apple by contrast(Thanks largely to the Intransigence of the Late Steve Jobs)has taken a very,very longtime to come around to that view[Even today There are many Outliers amongst Apple's teams who are against Interoperability with other OSes].

What will the future hold?

More of the same I believe.

@jame: Android 's market share is shrinking ! ? Which reports are you referring to? Last time I checked Android had gained considerably at the expense of Nokia and blackberry.
Reply  |  Post Message  |  Messages List  |  Start a Board

iCloud's apps can now be accessed from the Web.

I think that has been going on for a while now, right?. The Apple software update is offering me to download iCloud very often. It gets annoying.

The Apple Watch, which gets its big reveal March 9