Microsoft took one of its first steps into the mainstream wearables market Tuesday. No, it didn't announce its rumored fitness-centric smartwatch or present new findings from its research into mood-sensing smart bras. Rather, it revealed a OneNote app for Android Wear. It also announced several other updates for its mobile Office products, including flashy additions to its Office Lens app for Windows Phone.

Like most wearables apps released so far, OneNote for Android Wear offers only a few features -- namely, note dictation. The user can use this feature by simply saying, "OK, Google, take a note." Available through the Google Play store, the app requires not only an Android Wear smartwatch, but also a Wear-compatible smartphone running Android 4.3 or later.

In May, Office GM Julia White told InformationWeek that mobile users want "single-purpose apps that are great at what they do," instead of "thick, multi-tasking apps" that are hard to navigate on a small screen. OneNote for Android Wear clearly follows this philosophy. 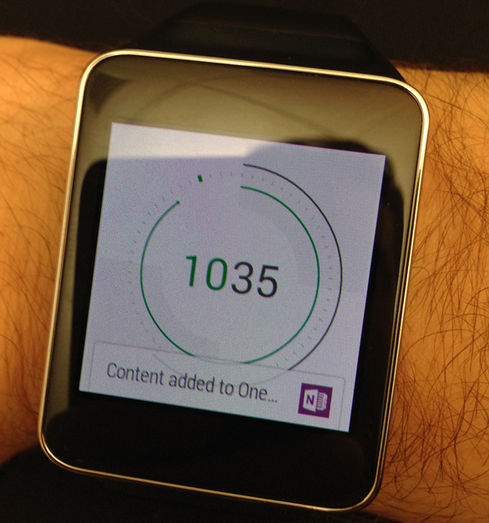 The same can be said of Microsoft's other Tuesday announcements: a OneNote Share extension for Apple's new iOS 8 and the aforementioned Office Lens update. Like the Android Wear app, both are built for quick, finite tasks.

After iOS 8 becomes available Wednesday, iPhone and iPad users will be able to use the Share extension to save content easily from Safari, Mail, and other apps to OneNote. If a user wants to store a web page or email attachment in a OneNote notebook, for example, she'll be able to do so with only a few taps in iOS's Share menu.

The Share extension lets users select the notebook and section into which the notes will be dropped. It can sync with both OneDrive and OneDrive for Business cloud storage. The new offering also supports offline use; users can import notes even if they're not connected, and the extension will simply sync with OneNote once it's back online.

Finally, the Office Lens update for Windows Phone enables users to snap a picture of whiteboard notes or a paper document and convert the image into an editable Word or PowerPoint document. Before, the Office Lens app simply optimized pictures for a more document-like reading experience, and it synced the images with OneNote, which can use optical character recognition technology to make text in the images searchable.

The new function opens a range of possibilities. In a blog post, Microsoft illustrated that a student on his way to class might notice a typo in a paper he's about to hand in. With Office Lens, he could snap a picture of the document, convert it to an editable Word file, make the necessary corrections, and print out a new copy once he gets to campus.

Similarly, if an exec takes a picture of whiteboard notes from an important meeting, he'll be able to generate a PowerPoint document that makes all the whiteboard elements editable. Microsoft says all handwritten lines and strokes from the images will be transformed into PowerPoint drawing objects that can be edited as the user sees fit. The Word and PowerPoint documents that Office Lens generates are automatically saved to OneDrive.

Microsoft's Office team has been iterating at a faster pace in recent months, releasing not only a range of app updates that support CEO Satya Nadella's cross-platform strategy, but also new Office 365 products designed around big data and machine learning. The company updated OneNote for iOS and Macs in late July, and in August, it introduced OneNote for Android tablets and enhanced its mobile OneDrive apps. Last week, it revealed Delve, a new, much-hyped Office 365 app for enterprise customers. It displays a Facebook-like news feed that shows users all the content and activity trending around them. According to Microsoft, Delve users won't have to spend time searching for important content, because the app will learn to surface the right information at the right time.

Michael Endler joined InformationWeek as an associate editor in 2012. He previously worked in talent representation in the entertainment industry, as a freelance copywriter and photojournalist, and as a teacher. Michael earned a BA in English from Stanford University in 2005 ... View Full Bio
We welcome your comments on this topic on our social media channels, or [contact us directly] with questions about the site.
Comment  |
Email This  |
Print  |
RSS
More Insights
Webcasts
Making XDR Work in Your Enterprise - May 12
Data Center Network Operations (NetOps) Reimagined
More Webcasts
White Papers
Global software company contracts with CBTS for Virtual CISO
Ransomware Defense for Dummies
More White Papers
Reports
Planning Your Digital Transformation Roadmap
Dark Reading Report: Battle for the Endpoint
More Reports

The silliness of wearables makes me hope that 3M comes out with a Post-It pad size that matches smartwatch screens. That way I can put Post-Its on my smartwatch as reminders and notifications.
Reply  |  Post Message  |  Messages List  |  Start a Board

Arguably, if Gates and Ballmer had done more of this sort of thing instead of pretending Android and iOS didn't exist, Windows might not now be a distant No. 3 in the phone market.
Reply  |  Post Message  |  Messages List  |  Start a Board

It's actually a shame their smartphones aren't selling. The Lumias are good phones and deserve more than 4% or 5% market share. This two-horse race in mobile is getting boring.
Reply  |  Post Message  |  Messages List  |  Start a Board

That's true, though I think the new Office Lens functionality seems pretty useful. If they keep producing apps like that (and keeping them cross-platform), they can make inroads in mobile productivity apps, even if their smartphones aren't selling.
Reply  |  Post Message  |  Messages List  |  Start a Board

I also just read that Microsoft has released a bluetooth keyboard designed for iPads and Android tablets. I assume the company's hoping more people will use Office on iOS and Android if they have a great keyboard. MS is really on the sidelines now, at least in mobile.
Reply  |  Post Message  |  Messages List  |  Start a Board