After a three-month preview period, the Android version of Microsoft Office is being released on the Google Play store.

Microsoft Office for Android tablets has officially launched, bringing Word, Excel, and PowerPoint to the Google Play store. It's welcome news to Android users at the tail-end of a three-month preview process.

The beta version of Office for Android tablets became available in November 2014, when users were given the opportunity to test the apps and provide feedback to over the course of its development. The preview generated more than 250,000 downloads of Word, PowerPoint, and Excel across 500 device models of varying sizes and capabilities.

Microsoft announced that the final product release would occur early in 2015, and now it's living up to its promise. The final version of Office for Android bears striking similarity to Office for iPad and iPhone, which was released almost one year ago and has been downloaded more than 80 million times. 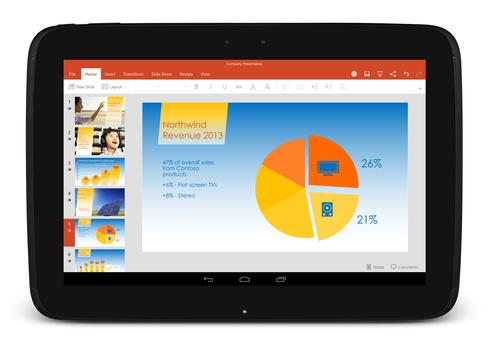 Android customers will find familiarity in the appearance of the new Office apps, which closely resemble their respective desktop versions but are optimized for mobile use. The Office ribbon lends itself to easy navigation and features large touch points to accommodate touchscreen commands.

The Android versions of Word, Excel, and PowerPoint also function similar to their iOS counterparts and allow users to create and edit documents, spreadsheets, and presentations on a variety of customizable templates. Recent documents can be opened on OneDrive or Dropbox accounts. 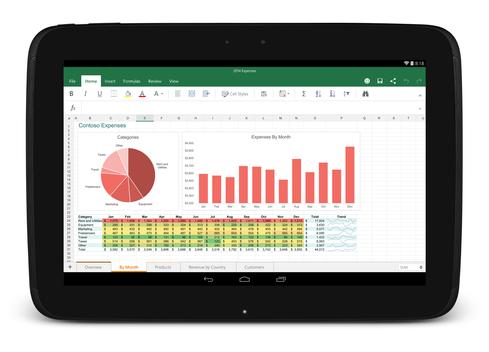 With its most recent announcement, Microsoft has officially brought full versions of its Office suite to all major mobile platforms and unified its appearance across devices. There is also little difference in functionality, as the iOS and Android versions of Office draw from the same codebase, as reported by TechCrunch.

Starting the morning of January 29, the completed Android-compatible versions of Microsoft's Word, Excel, and PowerPoint will be available for download. Devices must be 7" or larger, possess an ARM-based processor and at least 1GB of RAM, and run Android 4.4 KitKat or more recent software. Those larger than 10.1" require an Office 365 subscription to create and edit documents.

[Can you really compare HoloLens and Google Glass? Experts say no.]

The release of Office for Android comes hot on the heels of Microsoft's Jan. 21 announcement that Office for Windows 10 will be compatible for mobile and touchscreen devices. Its preview revealed a version of Office that is intended to work seamlessly across mobile devices.

Kelly Sheridan is the Staff Editor at Dark Reading, where she focuses on cybersecurity news and analysis. She is a business technology journalist who previously reported for InformationWeek, where she covered Microsoft, and Insurance & Technology, where she covered financial ... View Full Bio
We welcome your comments on this topic on our social media channels, or [contact us directly] with questions about the site.
Comment  |
Email This  |
Print  |
RSS
More Insights
Webcasts
Hybrid Cloud: The Great Balancing Act
Cybersecurity's Next Wave: What You Should Know
More Webcasts
White Papers
Why Add Security to Your Skill Set and How to Do It
Improving Security by Moving Beyond VPN
More White Papers
Reports
The Infoblox Q4 2020 Cyberthreat Intelligence Report
The State of Threat Detection and Response
More Reports


@Charlie     This probably explains why they are willing to make such drastic changes to what many considered an acceptable platform - Windows 7.

Windows 7 stood in the way of the vision in the end.


@Charlie    It certainly is and has been. .  MS appears bored with the constant revenue cash cow called their server division.   As you know, they have been moving for years in an effort to try to "capture the imagination" on the desktop side.   Redesigned the OS and forcing millions to take it or leave it (as usual).


Sure we can switch to the familiar but how could MS mss so badly ?   Do they not conduct market research ?    So now we have the box-like Windows 8 and Windows 10 which I assume is just another supped up version of 8.


I know they have this "vision" of  incorporation across all devices and into the Cloud but I think they might be trying to juggle too many "semi-deflated balls" at once.


This is an interesting development for Android tablets, not sure how many could take advantage of this offering, but I supposed there are some industries that could use Office inside their tablets.

I don't think I would use if for personal use since I am sure it is going to cost something.

Microsoft's bread and butter is in Windows Server and its applications, not Windows Desktop.
Reply  |  Post Message  |  Messages List  |  Start a Board
Editors' Choice
Hot Topics