Microsoft is reaching out to fans of Google's Android, trying to lure them away from Google Now by making its own digital assistant, Cortana, available to them.

Fans of Google's Android operating system now have an additional choice of digital assistant, thanks to Microsoft. With Cortana for Android users can now install Redmond's digital assistant in place of Google Now.

Microsoft released a private beta version of the Cortana digital assistant for Android last month to allow for testing, and the service is currently available only to users in the US and China.

The latest version of the beta allows Android users to replace the Google Now shortcut by pressing and holding the home button to activate Cortana instead.

Following in the footsteps of Apple's Siri digital concierge, as well as Now, Cortana was developed to help Windows users find things on a PC, tablet or smartphone, manage a calendar, track packages, find files, and hear jokes.

Microsoft says the more someone uses Cortana, the more personalized the experience will be. Users can set Cortana to hear them anytime they say "Hey Cortana," although that feature is not available for Cortana on Android at this time. 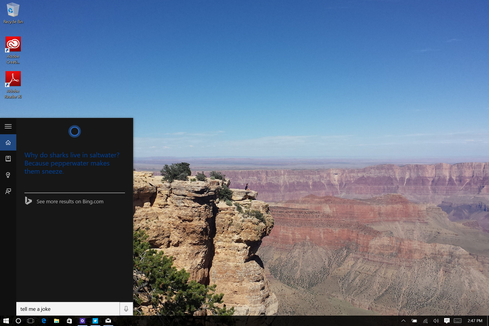 [Read how Linux and Azure can both work for IT.]

While Microsoft and Yahoo own about 6.5% of the $81 billion global search market, Google has a far more robust 54% of the market all to itself, according to a 2015 forecast by eMarketer.

In addition to bringing Cortana to Android, Microsoft is working to make its other applications and services more available to users of rival platforms, including Apple.

Last week Microsoft rolled out a new batch of apps for Apple Watch and Android Wear, with the newest wave of wearable productivity apps bringing Outlook, Wunderlist, and Yammer (a quick notifications service) to Apple Watch; OneNote to Android Wear; and Microsoft Translator to both devices.

Aside from apps for wearable devices and Cortana for Android, Microsoft recently released software that could help programmers simplify bridging the gap between Windows applications and apps for Apple's iOS mobile platform.

Windows Bridge for iOS, also referred to as WinObjC, is a Microsoft open source project that provides an Objective-C development environment for Visual Studio and Windows.

The iOS bridge supports both Windows 8.1 and Windows 10 apps built for x86 and x64 processor architectures. Soon it will add compiler optimizations and support for ARM, which adds mobile support.

Microsoft also recently announced a partnership with Dell, Samsung, and a slew of other manufacturers that will place cloud-based Office 365 apps, which include email, calendar, videoconferencing, and documents onto devices running Android.

Nathan Eddy is a freelance writer for InformationWeek. He has written for Popular Mechanics, Sales & Marketing Management Magazine, FierceMarkets, and CRN, among others. In 2012 he made his first documentary film, The Absent Column. He currently lives in Berlin. View Full Bio
We welcome your comments on this topic on our social media channels, or [contact us directly] with questions about the site.
Comment  |
Email This  |
Print  |
RSS
More Insights
Webcasts
Monitoring the Invisible - Digital Experiences in a Zero Trust World
Leveraging Infrastructure as Code to Streamline Security & Operations
More Webcasts
White Papers
Forrester Total Economic Impact Study: Team Cymru Pure Signal Recon
How Secure Are Your Endpoints?
More White Papers
Reports
Privileged Access Management Checklist
A Practical Guide to Enabling 5G Deployments
More Reports

Seeking a Competitive Edge vs. Chasing Savings in the Cloud Joao-Pierre S. Ruth, Senior Writer,  7/19/2021
White Papers
Integration Platform as a Service for Order Management Systems: Why Should You Care?
Incident Readiness and Building Response Playbook
How to Build Your Incident Response Plan
How Secure Are Your Endpoints?
GRC Buyer's Guide - 5 Steps to Success