50%
Tweet
The days of teenagers anxiously awaiting the moment they get their driver's license are long over. Now, a ride on demand and even a car delivered to your door is just a mobile app away. It's a major shift in the auto industry.

In the past five years, we have experienced a dramatic shift in the way people think about car ownership. Many more people, especially those living in cities, are choosing not to own cars, but to use public transport instead.

When you do need a car, it's now easier to rent one or order a ride instead. For some, the thrill of car ownership is gone.

Millennials are also delaying getting their driving licenses. About 20 years ago, two-thirds of teenagers in the US had a license by age 18, according to AAA. Now, however, only about half do.

Since 2010, fueled by many smartphone apps, we've seen an explosion of easier ways to share rides, rent cars on the fly, or just hop into an electric smart car for a quick ride.

Most large cities also have apps for public transport that make it easy to catch a bus. You just turn up at the bus stop a minute before it arrives.

Applications and services such as Lyft and Uber can to hail a ride for you anytime, anywhere. Car-sharing programs such as Car2Go and DriveNow let city residents enjoy the convenience of renting a car by the minute and dropping it off anywhere in the service area. 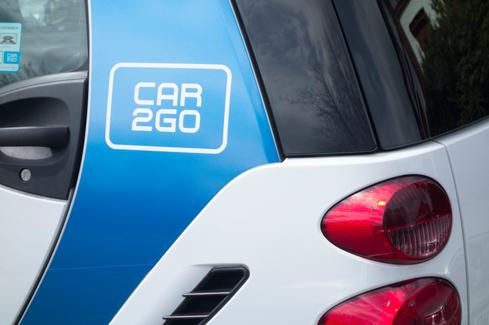 Car manufacturers are not ignoring the trend, nor are they fighting the phenomenon. Instead automakers are embracing it as an opportunity to co-opt the market.

One example is car-sharing services.

Auto manufacturers have been launching car-sharing programs in many countries. Daimler Benz's Car2Go is already available in 34 cities worldwide, with several locations served by electric smart cars. Its biggest competitor, DriveNow, a partnership between BMW and Sixt, uses a combination of gasoline and electric BMW i3 and ActiveE models. These companies offer on-demand "free-floating" cars that can be picked up and dropped off anywhere within the service area.

Car-sharing using electric vehicles is the best way manufacturers have to convince people of the advantages of electric cars. Most people don't know the performance and comfort of an electric vehicle until they actually drive one. Car dealers have been found trying to discourage potential EV customers, mostly because EVs require much less expensive maintenance.

Audi is taking a different approach.

The company has been exploring the possibility of centralized locations for daily rentals, based on the use of self-parking vehicles. It recently announced a pilot program in the city of Somerville, Mass. -- part of the Boston metro area -- where the German company will combine a fleet of "smart" self-parking cars, which can be rented on demand, with intelligent management that can significantly reduce parking space and the number of cars needed by residents. Audi's CEO Rupert Stadler argued at the recent Smart City Expo in Barcelona that "with piloted parking we could reduce parking space by about 60%."

Car manufacturers are investing heavily in the development of autonomous vehicles. Many of the big auto firms already incorporate some automated driving features in high-end models. It is likely that autonomous vehicles will be offered to car-sharing and ride-sharing companies before they are introduced to the consumer market.

These same companies are investing in ride-share companies, too. Recently, General Motors announced that it had made a $500 million investment in Lyft, the closest competitor to Uber. There is some speculation that GM wants to use Lyft's software and user base as a platform for hailing autonomous cars when they finally become available.

The one segment of the car industry that might end up on the wrong side of all this is the car dealership, which stands to lose out if more people start renting cars or calling for rides through various mobile apps. It happened with the travel industry, when booking vacations became a lot easier with the Internet. In Europe, where I live, car dealerships have been especially hard hit due to the changing driving habits of people, as well as an overall economy that's still struggling.

Still, dealerships and carmakers seem to have learned that they need to adjust to this new world. At the end of 2015, Volvo announced it's working with Microsoft to use the company's new HoloLens virtual reality system to enhance the car-buying experience. It's a new way of (virtually) kicking the tires on the lot.

Pablo Valerio has been in the IT industry for 25+ years, mostly working for American companies in Europe. Over the years he has developed channels, established operations, and served as European general manager for several companies. While primarily based in Spain, he has ... View Full Bio
We welcome your comments on this topic on our social media channels, or [contact us directly] with questions about the site.
Comment  |
Email This  |
Print  |
RSS
More Insights
Webcasts
Virtual Event: The State of Cloud Security
5 Steps to Integrate SAST into the DevSecOps Pipeline
More Webcasts
White Papers
eSentire Annual Threat Intelligence Report: 2019 Perspectives and 2020 Predictions
Securing Real-Time Communications for Dummies Book
More White Papers
Reports
eSentire Annual Threat Intelligence Report: 2019 Perspectives and 2020 Predictions
Apex Report: Global Cyber Infection
More Reports

It depends on how good public transportation is. SInce moving to Europe three years ago we don't have a car anymore, but public public transit in Barcleona is quite good.

Also we have several choices for car rental. The only thing I miss is the spontaniety of driving out of the city without previous planning. But we save a lot of money and the hassle of caring for the car.

I only wish that Car2Go or DriveNow were available here. Car2Go is now operating in Madrid so I hope they open up here soon.
Reply  |  Post Message  |  Messages List  |  Start a Board

This gives me a new way to think about cars. For most of my life I've been in an area where you HAD to have a car to get around. I'll be moving to a city soon and this gives a whole new way to see the function of a car. I was planning on using mass transit whenever able but wondered how hard it would be get where I needed to go in a regular car. But with the idea of ride sharing via apps, and cars you drive just for a single trip makes the idea and the possibilities so much more exciting.
Reply  |  Post Message  |  Messages List  |  Start a Board
Editors' Choice
Hot Topics