Forrester anticipates a future in which mobile apps give way to experiences that draw from multiple services to address consumer needs. Here's what it means to your business.

Apps, the focus of the mobile revolution since Apple opened its App Store in 2008, will give way to experiences that extend across different channels and contexts, according to a report from research consultancy Forrester.

In "The Future of Mobile: From App Silos to Open Ecosystems," Forrester said businesses should look beyond serving customers in apps, toward a world in which boundaries between services break down to allow better experiences.

"Today, most companies focus on which apps they need to build to solve a challenge," said Forrester analyst and report co-author Michael Facemire, in a phone interview with InformationWeek. "What consumers are going to want is for you to solve their problem."

Solving a problem may require going beyond an app. It may require data from different devices, cloud services, or environmental sensing. A prime example is the use of location data to make services more relevant to consumers. Target, Walgreens, and Walmart are among those with apps that can detect when a customer is in a retail store. Still, the low-hanging fruit of location data has yet to be broadly harvested in apps, according to Forrester.

That sort of communication requires some degree of openness between apps, mobile platforms, and cloud services. Forrester expects the future will bring more openness, so that businesses can utilize real-time, multidirectional data sharing to deliver contextual experiences beyond specific apps. 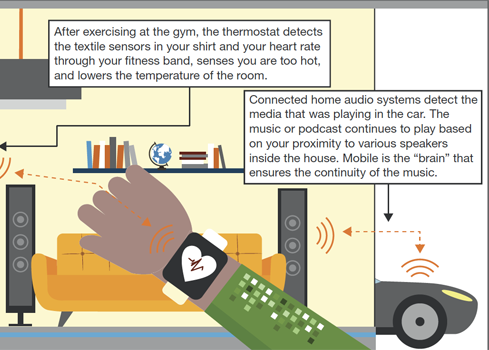 Openness isn't always appealing to app makers, platform companies, cloud service providers, or individuals. Facemire explained that tech companies can make data available through connectable components and APIs, or they can rely on middleware to mediate across service boundaries. "I'm not sure whether companies will be forced to be more open or whether we will have a new layer of middleware," said Facemire.

But there are signs that companies are looking beyond basic device data to incorporate information from other services. Witness the variety of "glue" services, such as IFTTT and Zapier, which allow mobile devices and cloud services to work together in ways that lead to better user experiences.

Companies may even go so far as to incorporate their apps into other apps. The report cited KLM and Uber, which make their services available through WeChat and Facebook Messenger, as examples of companies looking beyond siloed apps toward a seamless overall experience for customers.

Yet creating connections between services adds complexity that isn't easily dealt with by service providers. It may be a better experience to allow a smartphone to automatically enable a home security system when the homeowner leaves, but that breaks down when other variables enter the equation, like the possible presence of family members or guests.

"This is going to usher in a new way to doing development," said Facemire, who said he believes traditional procedural programming will give way to functional programming, in order to easily accommodate environmentally driven events. He points to the emergence of services like AWS Lambda and Google Cloud Functions as developments that support this shift.

For companies, the key is simplicity. Pointing to the days of Windows CE and the Palm Pilot, Facemire said the only people who used those devices were those who understood the technical work necessary to get some benefit out of them. Then Apple came along and made things simple with the iPhone, he said.

As the focus shifts from apps to experiences that span different channels, vendors have to simplify the experiences they're offering to make them appealing enough to bother with.

"It's all going to come down to simplicity," said Facemire, pointing to Google Now as an example of the kind of interaction we're likely to see in the years to come. "But, for vendors, their job becomes more difficult: taking complexity away."

Thomas Claburn has been writing about business and technology since 1996, for publications such as New Architect, PC Computing, InformationWeek, Salon, Wired, and Ziff Davis Smart Business. Before that, he worked in film and television, having earned a not particularly useful ... View Full Bio
We welcome your comments on this topic on our social media channels, or [contact us directly] with questions about the site.
Comment  |
Email This  |
Print  |
RSS
More Insights
Webcasts
Making XDR Work in Your Enterprise - May 12
Multi-Cloud Data Management for Modern Applications
More Webcasts
White Papers
World Wide Technology: Digital Transformation Customer Journey
The Microsoft Teams Telephony User Experience
More White Papers
Reports
[Tech Insights] SASE's Pandemic Boost Likely to Stick
The Need for Speed: Second Generation EDR
More Reports