Samsung increasingly looks to software to compete against Apple and Google.

Samsung is perhaps most well known for its wide array of consumer electronics equipment, including smartphones, tablets, television sets, computers, and more. The company is, however, pushing hard to create compelling software and services to accompany its hardware. Wonpyo Hong, president of Samsung's Media Solution Center, said the company is busy coding apps and developing platforms in order to better compete with Apple and Google.

"Software is a critical component. If you look at our R&D structure, there are a lot more software engineers than hardware engineers," said Hong in an interview with The Wall Street Journal. "The investment amount we are making in software R&D is huge. However, probably from a consumer perspective there is room to improve to deliver a unique experience. That's the area that we're really trying to focus on more. My organization's goal is to foster the software platform to bring innovation on top of our hardware."

One has only to look at Samsung's smartphones to see the lengths to which it has gone to develop its own software. Though the bulk of Samsung's smartphones run Google's Android operating system, Samsung created its own user interface -- called TouchWiz -- for its phones. Android supplies most of the apps needed by smartphone owners, such as Gmail, calendar, browser, music, camera, and so on. Samsung replaces many of these native apps with its own version.

One example of Samsung's success is the camera application. The stock camera software supplied by Google is basic and somewhat limited. Samsung borrowed expertise from its imaging products in order to improve what it can offer its smartphones. Some of those features include Dual-Shot (the use of both front and rear cameras at the same time) and Shot & More (creates a pastiche of several images with a moving subject).

Samsung has gone so far as to create its own content store, called Samsung Hub, and app store, called Samsung Apps. The Hub more or less doubles the functionality of Google's Play Store, and Samsung Apps does the same with the Play Store for apps. The difference is in the branding, user interface, and sometimes selection. Samsung wants device owners to use its apps and services, not Google's, whenever possible.

Samsung recently rolled out a music service called Milk. It relies on Slacker's music library and engine, but Samsung rehashed it to include a brand new user interface. The service is being offered to Galaxy device owners for free for a limited time. Milk's initial uptake has been modest with 380,000 installs. Other apps it offers include ChatOn for messaging, S Health for fitness and dieting, S Voice for voice commands/searches, and many others. 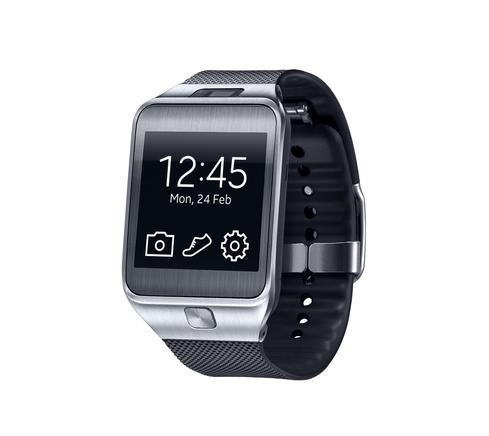 In addition to the apps and services, Samsung is also working on its own platform, called Tizen. Tizen is an open platform based on Linux. Samsung has been co-developing it with Intel for years. The company had hoped to bring Tizen devices to market by now, but has delayed their debut several times. Samsung did recently release Tizen-based smartwatches, the Gear 2 and Gear 2 Neo. It's too early to tell how Samsung's latest Tizen devices will sell.

Samsung remains committed to Tizen, according to Hong. "Tizen is another platform that we'd like to offer to the market as one of the multiple platforms. Internally, we'd like to have a common platform throughout all of our consumer products including mobile, television, and even home appliances."

That doesn't mean it hasn't ruled out alternatives, however. "We believe HTML 5 will be emerging more and more as the platform so that lots of applications and services can be implemented easily based on HTML 5. But it will take some time."

Samsung doesn't need to create these apps and services -- after all, it could just sit back and rely on Google's versions -- but they help differentiate its products from the competition. Differentiation is key these days, more so than ever.

Eric is a freelance writer for InformationWeek specializing in mobile technologies. View Full Bio
We welcome your comments on this topic on our social media channels, or [contact us directly] with questions about the site.
Comment  |
Email This  |
Print  |
RSS
More Insights
Webcasts
The Failures of Static DLP and How to Protect Against Tomorrow's Email Breaches
ROI and Beyond for the Cloud
More Webcasts
White Papers
Passwordless: The Future of Authentication
All In, Online Gaming & Gambling
More White Papers
Reports
Assessing Cybersecurity Risk in Todays Enterprises
2021 Top Enterprise IT Trends
More Reports

@Thomas... I am not as skeptical but clearly see the challenges that Samsung will run into. I do think they are thinking correctly though. The software is what they need to get into. If it's done right and works for them it could the rewards look pretty good.
Reply  |  Post Message  |  Messages List  |  Start a Board

It's hard not to be skeptical of a Samsung software push. What developer wants to create Tizen apps when Android, iOS and Windows Phone present better alternatives? And a UI layer like Touch Wiz isn't exactly all that compelling. Samsung would be better off just buying a few popular apps as Facebook has done.
Reply  |  Post Message  |  Messages List  |  Start a Board
Editors' Choice
Hot Topics