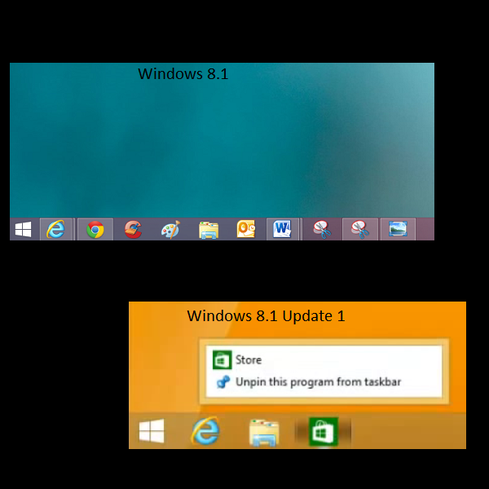 Pin Modern Apps to Taskbar
Windows 8.1 Update 1 softens the rigid boundaries between the Modern UI and Windows desktop. One of the most notable examples is that it lets you pin Modern UI apps to the desktop taskbar, and view a preview of a Modern-style app by hovering the cursor over its icon. This is a smart move by Microsoft. According to a study last year by Soluto, a cloud-based PC management service, most Windows 8 users ignore Modern UI apps, many of which are designed with touch tablets in mind. The pin-to-taskbar feature might encourage more PC traditionalists to give Windows 8 apps a try.

I think you're bringing up a noteworthy distinction, UberGoober. There are a ton of iPads in the enterprise, but a lot of them are used as secondary devices for information access, as you say. One of the big research firms (Forrester, if I remember) even did a study that drew that conclusion-- that iPads are often used alongside, rather than in place of, traditional PCs.

That said, I'm astonished how often I see people typing on their iPads. At every event I attend, I see journalists and analysts typing away on glass screens. Not just shorthand notes—full paragraphs, often punched out at a surprisingly quick rate. Personally, I still want a physical keyboard in situations like that-- and indeed, conventional laptops (albeit with a higher-than-average MacBook representation) are still far more ubiquitous at those events. But it's clear that people are increasingly using tablets for content creation. I don't think there will be a tipping point where touchscreens takes over for "real work," or that physical keyboards are going away, or anything like that—but I've heard analysts say that more words will be typed this year on glass than on actual keys. I'm not sure if I believe that, but the fact that it's even close tells you that tablets are being used for more than watching videos. (Though I concede a lot of those words will be dedicated to vapid text messages and Facebook status updates on smartphones.)

For productivity tasks that require quick exchanges or that involve moving or slightly modifying information, tablets can actually be preferable to traditional form factors. I'm not going to get rid of my computers any time soon; I need them for substantive writing, spreadsheets, video and photo editing, and other tasks that don't tablets very well. But I think the "content consumption vs. productivity" debate involves a lot of rigid definitions about what constitutes "real work" and what doesn't. There are shades of gray, and tablets occupy lots of them.
Reply  |  Post Message  |  Messages List  |  Start a Board

I guess we will have to agree to disagree. Bluetooth keyboards and cases like Zagg with built in keyboard (have you tried? really great) mean you do not have to type on tablet screen. I know lots and lots of sales people who do almost all work on a tablet. Not just sales, either. Varies by industry but even in insurance...lots of tablets. core apps running on tablets. Talk to these CIOs: It is not optional.
Reply  |  Post Message  |  Messages List  |  Start a Board

Interesting point, UberGoober. Some of the same people who leaked accurate Update 1 rumors claim that windowed Modern apps will arrive in Windows 9 next year. But by then, too little too late? It seems like a feature that might have been included from the start-- what's the delay? And are there any Modern apps that users are hankering to run in a window on the desktop?
Reply  |  Post Message  |  Messages List  |  Start a Board

Agreed, Laurie. I find tablets limiting for certain kinds of productivity, but I think it's inaccurate and myopic to whitewash tablets as consumption devices. We explored various workplace tablet use cases in a magazine article last spring, and just today, Eric Zeman stated most knowledge workers could probably get by with Samsung's new 12-inch tablet.
Reply  |  Post Message  |  Messages List  |  Start a Board

Oh, PowerShell... There's an industry of Microsoft partners who exist just to make PowerShell less difficult to deal with.

Anyhow, you bring up an interesting point. Microsoft brought a bunch of enterprise capabilities online with Windows 8.1, but some are still missing. But is that really what's keeping enterprises from adopting?
Reply  |  Post Message  |  Messages List  |  Start a Board

I would disagree that tablets are primarily "entertainment-consuming platforms." In all manner of industries, salespeople are using tablets as primary device now -- at home office and in the field. Many knowledge workers can do what they need to on a tablet. Tablets may have started out as "nice to have" but they have become must-have at many enterprises. Also, go to any C-level gathering (board meeting, conference, etc.) and you will see all tablets.
Reply  |  Post Message  |  Messages List  |  Start a Board

Thanks for weighing in. Desktop user frustration coming through loud and clear here. Perhaps the tweaks did not go far enough?
Reply  |  Post Message  |  Messages List  |  Start a Board
InformationWeek Is Getting an Upgrade!