9 Technologies That Matter In 2014 - InformationWeek

Apple iWatch
It's more or less a given that Apple plans to introduce a computerized watch in 2014. It could be called iWatch, given the company's penchant for products prefaced with the letter "i". Presumably, it will do what other smartwatches do. Perhaps it will be better received. Recent smartwatches from Samsung and Sony have underwhelmed. The devices have been dismissed for costing too much and for lacking in battery life, processing power, and apps.

Apple's challenge is to avoid creating a device made redundant by smartphones. Smartwatches need to have a unique reason for being -- a killer app or indispensable function. They need to be more than a sidecar for the smartphone user who has everything. If Apple priced its iWatch for $99 and offered basic location tracking and communication capabilities without an expensive mobile carrier contract, it would sell millions to parents who want to keep in touch with their kids.

However, chances are Apple will aim for a higher price point, making it simply a wearable reminder that you have a lot of unread email.

Chrome OS tablet
Google should ship a Chrome OS tablet at some point in 2014. Given how well Chromebooks have been doing in schools and the fact that schools are also buying tablets, a Chrome tablet seems inevitable, particularly since Google offers a potential tablet design on its website, and company officials have publicly discussed the possibility. Google already has touch technology working on its Chromebook Pixel.

The next step is getting rid of the keyboard. And that's easier than ever, thanks to the recent improvements in the Chrome OS virtual keyboard. What will it be called? Chromescreen or Chrometab, perhaps?

Project Ara
Project Ara is an effort by Motorola Mobility and the Phonebloks community to create a series of smartphone modules that can be snapped together to perform specific, customizable functions. Motorola just announced a partnership with 3D Systems to manufacture Project Ara components using 3D printing technology.

This custom assembly line isn't likely to be ready next year, but Project Ara devices could be made available to early adopters next year. 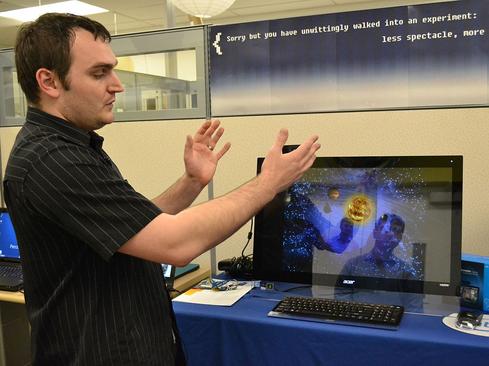 Gesture control
Between Microsoft Kinect and the integration of the Leap Motion Controller into HP's 17-inch Envy laptop, it's clear that the mouse and keyboard are not the only ways to interact with computers anymore. In 2014, we'll see this trend accelerate. More hardware will track gestures, and developers will begin to deliver compelling games that rely on gesture input.

Intel is helping PC and peripheral makers integrate its motion sensing technology into hardware products with its Perceptual Computing SDK. The first products to take advantage of this technology include Creative's Senz3D and Interactive Gesture Camera. Expect more hand waving in 2014.

Mind-machine interfaces
Touch input magnified the mobile revolution by making interaction easier while on the move. Gesture control and voice control are redefining the scope of device interaction by expanding input methods beyond our hands. Brain control may be the ultimate way to interact with machines, and the technology is moving beyond experimental settings.

The Emotiv EPOC is a $299 headset designed to let users control software and hardware using their brains. NeuroSky makes the $130 MindWave Mobile headset, which is bundled with games you can control using your mind.

And if you want a sharper brain, it's a potential option. Foc.us recently began shipping its transcranial Direct Current Stimulation (tDCS) headset, which promises to let users "overclock" their brains -- stimulate them with electricity to improve cognition. And who wouldn't want to deliver electric currents to their brain?

There will be more of this. Researchers have already demonstrated that brain signals can be sent electronically to another person to trigger a keystroke.

Personal medical monitoring
When people talk about the Internet of Things, they're talking about sensors. The most interesting network-connected sensors are medical, because they hint at the possibility of mitigating ridiculously high charges for medical services at hospitals and because they may be able to improve people's lives. Serious medicine isn't likely to ever be predominantly self-service, but you can expect a growing number of medical diagnostic tests to be made available through consumer-oriented devices.

The future is already here. It's just not yet connected to your smartphone.

Will a Chrome tablet be the final nail in the coffin for Android tablets? Or will the two coexist?

What does ChromeOS offer for a tablet that's missing from Android?
Reply  |  Post Message  |  Messages List  |  Start a Board

> Will a Chrome tablet be the final nail in the coffin for Android tablets? Or will the two coexist?

I expect they will co-exist for a while. Eventually, I think Android apps will able to be embedded in Chrome OS. Android has costs (patent licensing fees) that Chrome OS doesn't, so it would make sense for Google to shift toward Chrome over time.
Reply  |  Post Message  |  Messages List  |  Start a Board

I think the opportunities in medical monitoring will offer the most practical benefits to the most people in the near furture. We have already come so far in medical tech, but the improvements in mobile devices and connectivity have enabled patients to live much more normal lives, and provide their doctors with more accurate and actionable data.
Reply  |  Post Message  |  Messages List  |  Start a Board

Wireless charging is a must -- I've been out and about countless times with a quickly draining phone battery. I've seen some wireless charging stations at Starbucks, for example, but those require a certain type of phone case. Can't wait to see what Apple has in store.
Reply  |  Post Message  |  Messages List  |  Start a Board
InformationWeek Is Getting an Upgrade!